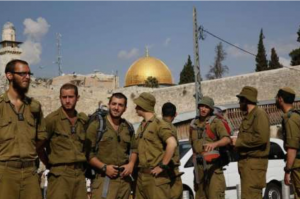 King Abdullah II told journalists that Jordan will be forced “to take actions” over Israel’s “provocation” on the Temple Mount should it continue.

Jordan’s king warned Israel on Monday that any further “provocation” in Jerusalem where Israeli police have clashed with Muslims at Al-Aqsa mosque would damage ties between the two countries.

“Any more provocation in Jerusalem will affect the relationship between Jordan and Israel” which have a 1994 peace accord but which has custodian rights over the Al-Aqsa mosque compound, said King Abdullah II following a second day of clashes at the flashpoint holy site in east Jerusalem. 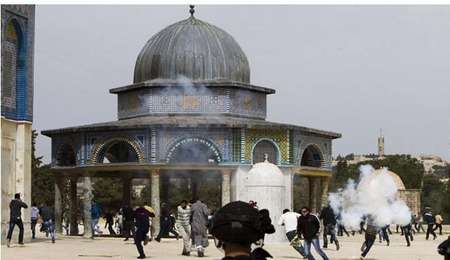 “Jordan will not have a choice but to take actions, unfortunately,” he told journalists in English after talks with visiting British Prime Minister David Cameron.

Jordan — the only Arab state with Egypt to have a peace treaty with Israel — recalled its Tel Aviv ambassador in November after similar clashes, returning him to his post three months later.

US condemns ‘all acts of violence’

The United States on Monday condemned “all acts of violence” at Jerusalem’s Al-Aqsa compound where Muslims and Israeli police clashed for a second straight day. 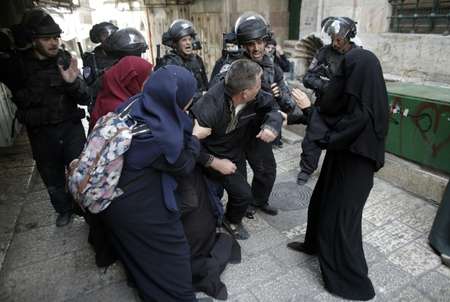 “The United States is deeply concerned by the recent violence and escalating tensions surrounding the Haram al-Sharif Temple Mount. We strongly condemn all acts of violence,” State Department spokesman John Kirby said, calling on all sides to exercise restraint.

“It is absolutely critical that all sides exercise restraint, refrain from provocative actions and rhetoric and preserve unchanged the historic status quo on the Haram al-Sharif Temple Mount, in word and in practice,” Kirby said.

As they had the day before, Israeli security forces entered the compound early on Monday to prevent Muslim youths from harassing visiting Jews, police said.

Clashes then broke out on the hilltop complex, with booms heard from outside its gates. Muslims have barricaded themselves inside Al-Aqsa amid protests over access to the site, venerated by Jews as the Temple Mount.

“As the police entered the compound, masked youths fled inside the mosque and threw stones at the force,” a police statement said.

Police said that five protesters were arrested in the compound and visits went ahead as planned.

Another four were arrested in skirmishes between security forces and protesters in the surrounding alleys of Jerusalem’s Old City.

Police fired stun grenades while hitting and kicking demonstrators and journalists, including from AFP, as they sought to push back crowds.

Muslim protesters fear Israel will seek to change rules governing the site, with far-right Jewish groups pushing for more access to the compound and even efforts by fringe organisations to erect a new temple.

Israeli Prime Minister Benjamin Netanyahu has said the status quo will be preserved at the sensitive site, but suspicions remain among Palestinians, a sign of the deep mistrust between the two sides. 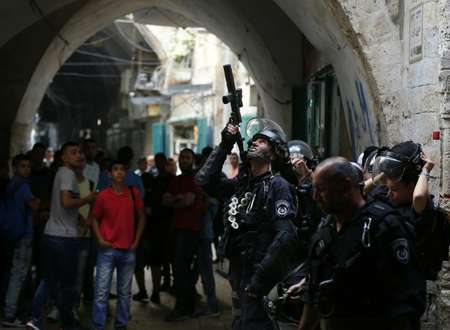 A member of Israeli security forces looks up as stones are thrown at them as they block a road leading to the Al-Aqsa mosque compound in Jerusalem’s Old City on September 13, 2015 – Photo: Ahmad Gharabli /AFP

“Clearly, Israel is deliberately creating and escalating a situation of instability, insecurity and violence, thereby incrementally assuring by force its power/security control in preparation for the total annexation and transformation of Al-Haram Al-Sharif.”

Muslims refer to the entire compound as Al-Haram Al-Sharif, or Noble Sanctuary.

Non-Muslims are allowed to visit the compound, but Jews must not pray or display national symbols for fear of triggering tensions with Muslim worshippers.

Non-Muslim visits to the site increase during Jewish holidays, with some 650 visitors on Sunday, according to police. Another 500 visited on Monday during the 7:30 am to 11:00 am visiting hours, police said.

The Jewish New Year, or Rosh Hashanah, began on Sunday evening and ends on Tuesday evening. 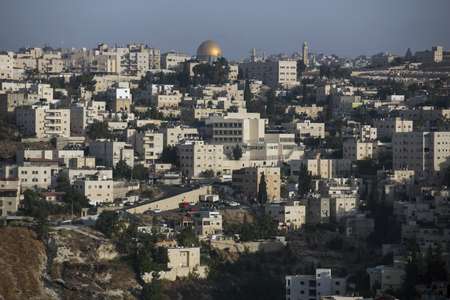 The Arab East Jerusalem neighborhood of Ras al-Amud is seen in front of the Dome of the Rock on the compound known to Muslims as Noble Sanctuary and to Jews as Temple Mount, in Jerusalem’s Old City July 27, 2015. – Photo: REUTERS/Baz Ratner

His office said the Murabitat and Murabitun groups were “a main factor in creating the tension and violence” at the compound.

In clashes on Sunday, Muslim witnesses said police entered the mosque and caused damage. Police said only that they closed its doors to lock in rioters throwing stones, fireworks and other objects.

Israeli security forces have used the same tactic in the past to restore calm and which has seen them briefly enter the mosque.

Palestinian president Mahmud Abbas condemned Sunday’s raid, saying sites such as Al-Aqsa constituted a “red line” and adding that “we will not allow attacks against our holy places”.

Netanyahu however said “it is our responsibility and our power to act against rioters to allow freedom of worship at this holy place.” He said Israel would act “to maintain the status quo and order” at the compound.

Amid the heightened tensions in Jerusalem, police said Monday that stone-throwing caused a car crash that killed an Israeli motorist. 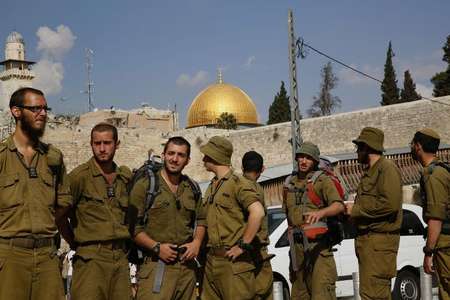 Israeli soldiers stand near the Western Wall at the al-Aqsa mosque compound, Islam’s third holiest site, but also the most sacred spot for Jews who refer to it as the Temple Mount on October 30, 2014 – Photo: Gali Tibbon/AFP

The man was gravely injured after unknown assailants attacked his car with stones in the southern Jerusalem neighborhood of Arnona and succumbed to his injuries overnight.

Reports say the 50-year-old man suffered a heart attack as a result of the attack, causing him to swerve into a pole and off the road.

Two additional passengers were lightly injured after the vehicle swerved off the road.

Israeli Prime Minister Benjamin Netnayahu will convene a meeting after the end of Rosh Hashsanah to address the stone throwing and firebomb attacks in and around Jerusalem that occurred over the weekend.

“Netanyahu views the throwing of stones and molotov cocktails as grave attacks against Israeli citizens and intends to fight the phenomenon with all available means further by all means including stricter sentencing and enforcement,” the statement read.