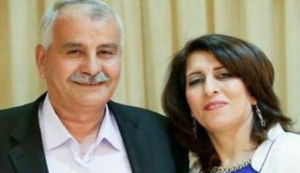 Their classmates—a group dominated by ultra-Orthodox and Orthodox Jews—warmly embraced them throughout their years of study together.

Muhammad, 62, is a retired teacher of Arabic and civics, while Aida, 52, continues to teach Hebrew in their local grade school. In recent years, the couple has studied Bible, history, Jewish philosophy, Hebrew literature, Kabbalah, liturgical poetry, midrash, as well as Jewish viewpoints on exclusion and social justice.

“We wanted to study for a Master’s Degree, and we heard there was an option to study Judaism, so we said we would try,”‎ explains Mohammed Masarwa. “Since retiring, I have worked as a tour guide. This program interested me, and it does not seem strange to study Judaism. We live in this country, we hear about Judaism, and we wanted to expand our knowledge.”

Masarwa‎ added, “‎I am a Muslim, and although I have extensive knowledge of Judaism, it’s clear to me that I still have a lot to learn. But to our surprise, we discovered that many of our Jewish classmates did not necessarily know more about Judaism than my wife and I did. The reason for this, in my opinion, lies in the fact that Judaism is similar to Islam in certain respects.”

Muhammad and Aida had already earned bachelor’s degrees, so encountering Jewish students in an academic setting was nothing new to them. “‎Despite the differences between the students, the classes had a free, open atmosphere, and everyone felt comfortable stating their opinion,” Masarwa said.

Among the students, he said, “‎the atmosphere was very open and pleasant. ‎They received us very respectfully, which is notable because the Jewish students did not resemble each other—each of them came from a different background and from a different culture. Together, we created an interesting discourse about Judaism and Islam.”

The couple’s four children are also in academia (medicine, optometry and pharmacology) and welcomed their parents’ decision to return to school. “‎They know we always enjoy learning new things, they just laughed at the fact we would be studying for a Master’s Degree at our age,” he said.

Their family was also very positive about their decision to study Judaism in depth. “We are open people and live with Jews, so everyone embraced our decision. Our children come from an academic background, so it was not strange to them that we decided to study for another degree—even in Judaism—considering the fact that we are educators,” Masarwa explained.

Muhammad and Aida’s classmates included students from all parts of Israeli society. Moshe Yisraeli, a graduate of the hesder yeshiva in Kiryat Shmona—a program that combines traditional Jewish studies and military service—said he approached graduate school with some concern.

“This is a kind of Jewish study that is different from what I have known all my life. ‎It was very interesting to be in classes with Reform, secular and religious people. The arguments were not as volatile as the media often likes to present them,” Yisraeli said.

Dr. David Biton, head of the School of Jewish Studies at Ono Academic College’s Kiryat Ono campus, said that after the success of this first class, enrollment has doubled for future classes.

“‎The MA program exposes students to different dimensions of Judaism and to the various groups that comprise it, creating connection and belonging between the past and the present, between East and West, between the visible and the concealed, and between tradition and modernity. The purpose of the program is to make higher education accessible to all segments of the Israeli population,” he said