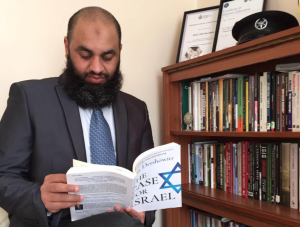 During the many years since I started talking with my fellow Muslims about their baseless arguments against the state of Israel, I could see them arguing without knowledge. I could tell they know nothing about Israel. They had a few topics to discuss, “illegal settlements, Gaza being blockaded, unlawful occupation and Israeli operations against Hamas, the Holy Land belongs to Palestinians and Palestinians are indigenous habitants of the land.” Most are not willing to find accurate facts behind these topics. They are not even interested in listening or reading information when someone shows them the truth; they only know how to single out and bash Israel.

Once they get defeated in speaking with Israelis or they even feel they are not winning the topic they started, they start abusing the other speaker and begin using foul language against and about the Jewish people. I think no one taught them how to win a debate, and they did not learn to defame Israel in a proper way. You cannot win the argument until you have enough knowledge about what you are arguing about. For example, if you are going to single out Israel, but you know nothing about the real history of Israel, you have never met any Israeli or even you have never met any Palestinian either, you simply cannot do the discussion.

Therefore, I am going to help you learn to go about defeating the Israelis (and Zionists) in any debate. I will tell you three important formulas not to bring into the discussion so that you will never be shamed in arguments with any Israelis or Zionists. You just need to grasp and be able to have full knowledge of how to skip these three formulas.

“And We said after Pharaoh to the Children of Israel, “Dwell in the land, and when there comes the promise of the Hereafter, we will bring you forth in [one] gathering.”

“O my people (the Jews)! Enter the Holy Land, which God has assigned unto you”

Notice that both of these verses support the Jewish land of Israel. Now, will you deny these verses or erase these verses from the Qur’an? I know you will never dare to do this. Stop bringing religion into this conflict, otherwise no one can save you from being defeated and if you deny these verses, you are actually denying your religion and thereby committing blasphemy. Another thing must remember that we Muslims believe Israeli prophets and accept that they all came from the tribe of Israel (Jacob) and belonged to the land of Israel. We could not deny these grounds so better to not discuss religion on this matter and just ignore the religious grounds on this conflict.

There are multitude of scientific, historical and archaeological pieces of factual evidence that the Jewish nation has belonged to the Holy Land of Israel for thousands of years. Again, it is written in the Qur’an as well, that Abraham, Isaac, Jacob, Joshua, David and Solomon and many more (Peace Be Upon Them) were Israelis and belonged to the Holy Land of Judea and Israel, now called the State of Israel and beyond her current borders. There are many proofs discovered during archaeological digs which clearly demonstrate this.

Examples of these objects include pieces of 2 to 3-thousand-year-old Jewish currency, and many more religious and secular goods. If you read the history, you will find the different years of the Jewish presence beginning with documentation from the Pharaonic Egypt and the Chaldean Empires beginning in approximately 3,000 BCE. I must also mention a few here: the King David era (c. 1010–970 BCE.), Northern and Southern kingdoms eras (c. 920-720 BCE), Assyrian Empire era (c.720-586 BCE), Babylonian era (c. 586-536 BCE, Hasmonean Dynasty (c.152 – 63 BCE), Roman era (135 CE-390 CE), Islamic (Ottoman) era (390 CE-1920 CE), and the British Mandate (1922-1947 CE). Of course, you can also simply deny whole factual history like UNESCO recently did, and you will believe you are the winner but better not to bring historical grounds in your discussion.

Just blame Israel as an occupied land of the Palestinians and claim that the Holy Land belongs to Palestinians ONLY. Create a fake Palestinian history older than the Jewish history and bring it to the discussion table with the Israelis. If they claim their history 5,000 to 10,000 old, you bring Palestinians’ history back to Adam. Before you claim the history of Palestine, you need to know the real history of the people known as the Sea People (Philistines).

My advice is either you claim that Palestinians were the only indigenous people of the holy land and stick with it (despite the factual evidence to the contrary), or do not bring the history of the Palestinian people to any debate; otherwise you would be defeated again very badly. If we bring the discussion from the First World War and the Second World War or about the creation of Israel in 1948 or even since the Six Days War 1967, we will be defeated based on the ground realities which I will mention at some point in my next article.

If you understood my formulas and advice then Let’s Defame the Jewish State of Israel.

My thanks to Noor Dahri for his permission to re-publish his article.

Noor Dahri is an independent researcher based in London, UK, director of Pakistan Israel Alliance (PIA) and Editor in Chief of the Newspaper Pak Israel News (PIN).