Washington’s unequivocal support of Israel’s right to self defense is key element in making cease-fire possible.

Washington understands well that Israel’s restrictions on the Gaza Strip are related to arms smuggling, and that a total relaxation of the restrictions would necessitate assurances that arms stop pouring into the enclave, a senior US official said Monday. 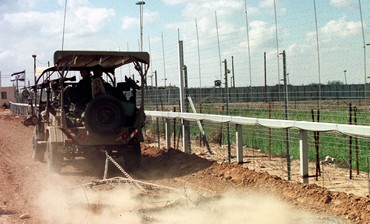 The official’s comments came as Egyptian mediators began separate talks Monday with Hamas and Israel to flesh out details of last Wednesday’s cease-fire.

The US official said that as a “goodwill gesture” Israel agreed to extend Palestinian fishing rights from three to six miles off the Gaza coast.

An Egyptian official told Reuters the talks would discuss Palestinian demands for the opening of more Israeli crossings into Gaza. Senior Hamas leader Mahmoud Zahar told reporters on Saturday that the group wanted to see the opening of all four goods crossings with Israel that used to operate before 2006.

The senior US official said that Washington realized that stopping the smuggling is a “critical element” of the cease-fire, and that the US will make this a priority in its discussions with the Egyptians and other international players. The specific mechanisms of how to fight the smuggling were still to be worked out, he said.

According to the official, US President Barack Obama spoke to Prime Minister Binyamin Netanyahu four times during the eight day Gaza crisis, and with Egyptian President Mohamed Morsi six times. During part of the crisis Obama was on a state visit to Thailand, Myanmar and Cambodia, but still remained in close contact with the parties in the region.

The official provided the following chronology of US involvement:

On November 14, the day Israel killed Ahmed Jabari, Obama spoke by phone with both Prime Minister Binyamin Netanyahu and President Shimon Peres in pre-arranged congratulatory calls for his re-election.  He heard from Netanyahu about the Jabari operation and the possibility of a ground operation into the Gaza Strip if the missile and rocket attacks did not stop. Obama made clear that he fully understood Israel’s right to self defense and supported it, and also understood that the cause of the attack on Jabari were the hundreds of rockets over the last few weeks.

Obama spoke to Morsi that night and discussed the role Egypt could play in the de-escalation.

Obama embarked on his trip to Asia on Nov. 17, accompanied by Secretary of State Hillary Clinton, who spoke continuously with her French, Qatari, Turkish and Egyptian counterparts, as well as with Foreign Minister Avigdor Liberman and UN Secretary-General Ban Ki-moon.

Obama gave a press conference in Bangkok where he said it was his preference that the crisis be solved diplomatically, but stressed that Israel had a right to defend itself, the rockets needed to stop, and Egypt had a key role.

At 4.30 am on the morning of November 19 US ambassador Dan Shapiro met with Israeli officials in Tel Aviv to discuss the content of cease-fire discussions that were being held between Israel and the Egyptians. This convinced the Americans that it was worth sending Clinton to the region.

On November 19 Obama spoke to Netanyahu, and phoned Morsi twice. Morsi then called the president for a third conversation.

Clinton arrived in Israel on the 20th and went directly to a meeting with Netanyahu. She also met with Defense Minister Ehud Barak, Liberman and National Security advisor Ya’akov Amidror to review the cease-fire draft, and discuss what would be required to bring about a successful conclusion.

Clinton went to Ramallah the next morning and, at Netanyahu’s request, returned to Jerusalem for another meeting. That meeting gave her a clear idea of how to approach the discussion with the Egyptians.

As Clinton arrived at Ben-Gurion Airport she heard news of the Tel Aviv bus bombing, and called the Prime Minister’s Office to see if there was a change in Israel’s approach. She was told there was not.

Clinton traveled to Cairo where the Egyptians used their influence on Hamas and the Palestinian factions to agree to the deal.

Obama then called Netanyahu and recommend Israel accept the cease-fire. He then called Morsi to thank Egypt for its role.

The official said that three elements made bringing about the cease-fire possible. The first was the unequivocal US support for Israel’s right to self defense. This was something repeated often by Obama and other US spokespeople, and left no doubt in the international community of where the US stood on the matter.

The second element was the close cooperation between Israel and the US, with Israel seeking Washington’s views and help in bringing the matter to a conclusion when some gaps still remained.

And the third element was the close US —  and Israeli — engagement with Egypt.  Egypt was recognized as the “only party that could influence Hamas and get them to accept certain things.” Cairo, the senior US official said, “played that role and delivered.”