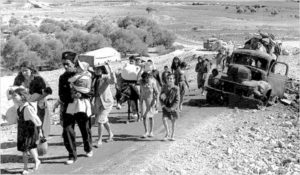 Lawmakers say the report could impact how the U.S. views the refugee issue when the actual number of refugees is made public and is significantly smaller than the number of Palestinian refugees according to the United Nations.

Once the largest donor to the U.N. Relief and Works Agency, which provides assistance to Palestinian refugees and their descendants, the U.S. in January cut $65 million of a planned $125 million in aid funds to agency.

The agency, which asserts that there are 5.1 million Palestinian refugees worldwide, focuses on providing health care, education and social services to Palestinians in the West Bank, Gaza Strip, Jordan, Syria and Lebanon.

Having entered the British Mandate of Palestine a few years earlier seeking a better life, these Arab migrants return ‘home’ to Lebanon when told to leave the area to allow the invading Arab armies to come in unhindered to annihilate the Jews. – 1948 – Public Domain (Israel Archives)

All other refugees fall under the U.N. High Commissioner for Refugees.

Sen. Ted Cruz, a Republican, told the Free Beacon that access to the report was necessary for Congress to provide oversight for American taxpayers.

“UNRWA lashes out against America and engages in anti-Semitic incitement. Hamas terrorists use UNRWA facilities to target Israeli civilians,” Cruz told the Free Beacon. “The American people deserve to see this reported State Department assessment, so Congress and the administration can have a transparent and productive debate about America’s role in the organization.”

Sources who have seen the report say that the State Department’s assessment was that only 20,000 of the 700,000 Arab refugees who fled Palestine during the War of Independence are still alive and displaced from their homes.

While researching material for her 1984 book “From Time Immemorial,” American journalist Joan Peters learned that the United Nations made the conscious decision to differentiate Palestinian refugees from all other refugees.

Refugees are generally defined as people who fled a permanent home, while in the Palestinians’ case, someone [migrants] who lived in Palestine for as little as two years prior to Israel’s establishment in 1948 could be considered a refugee.

In addition, unlike all other refugees, Palestinians refugees pass their status on to their descendants. As a result, Palestinian refugees are said to number in the millions.

Israel has begun to raise the issue in the international arena and Prime Minister Benjamin Netanyahu has said U.N. funds should be transferred to Palestinians through the U.N. refugee agency and UNRWA should be abolished. Doing so, however, would require the U.N. General Assembly to pass a resolution in favor of the move, which is unlikely given the international forum’s anti-Israel bias.