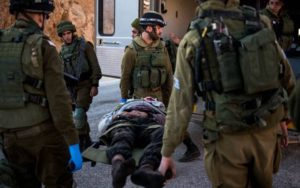 IDF’s “Operation Good Neighbor,” first revealed this past July, was initiated as an ad-hoc solution to treat Syrians who came to Israel’s border fence seeking immediate medical attention from IDF soldiers, then expanded into an organized governmental mission in June 2016, as Syria’s humanitarian needs grew.

Over four years ago, an injured Syrian came to the border asking for medical help from the IDF. Back then, there was no policy,  just a commander’s on-the-spot decision to provide care to an injured civilian. Since then, the aid has continued on a near daily basis. In June 2016, as part of a decision to expand humanitarian aid efforts, the IDF Northern Command established the headquarters of Operation Good Neighbor.

The goal of Operation Good Neighbor is to provide humanitarian aid to as many people as possible while maintaining Israel’s policy of non-involvement in the conflict. The first activities coordinated by the headquarters took place in August 2016. Since then, there have been more than 110 aid operations of various kinds.

“Based on my 20-year medical career, I can truly say that the medical care we have provided to our neighbors here in the north of Israel is one of the most significant efforts to treat those in need that I have ever witnessed,” said Col. Dr. Noam Fink, the Chief Medical Officer of the Northern Command. “I deeply hope that our contribution will have a direct impact on the lives of our Syrian neighbors.”

The primary recipients of the aid are the approximately 200,000 residents of the Hauran region of southwestern Syria. About 400 families live in tents near the Israel-Syria border. The rest live in villages or out in the open. A third of the aid recipients are displaced persons or refugees and half of them are under the age of 18.

“The people of Syria want peace with Israel,” one of the aid recipients wrote from an Israeli hospital. “To any Syrians that think that Israel is our enemy – you are wrong.”

The IDF primarily provides 3 types of assistance as part of Operation Good  Neighbor:

The IDF provides aid to Syrians on the other side of the border for two primary reasons. Firstly, we have a moral imperative. We can’t stand by watching a severe humanitarian crisis without helping the innocent people stuck in the middle of the conflict. We also believe that the aid will ultimately create a less hostile environment across the border – and that will lead to improved Israeli security.