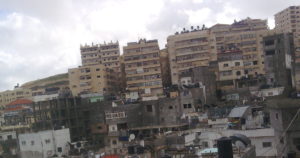 With eye on indoctrination, the official logos to six different UNRWA financed schools include the UN logos along with map of Israel replaced by Palestine. – Photos: ElderOfZiyon.blogspot.

With improper sanitation and garbage removal, no police, high crime rates and awash in weapons, an estimated 80,000 Palestinian residents live walled off there.

“There was a park and it was green. Green trees, green grass, there was green everywhere. And there were flowers. And a fountain in the middle,” said refugee Wallah Adaween.

Growing up in the Shuafat refugee camp, Adaween shared a four-room apartment with eight siblings, two parents and and two sets of grandparents – 15 people.

“The first time we saw rats we were scared, but then it became normal. So we didn’t notice them anymore. We had a squat toilet at home. Sometimes rats came through there,” shared Adaween.

Located on the outskirts of Jerusalem, Shuafat is an overcrowded, concrete, “no man’s land” – neither Israel nor the Palestinian Authority takes direct responsibility for the camp or its approximately 85,000 inhabitants.

Built by Jordan in 1966, annexed by Israel in 1967 and walled off by and from Israel in the early 2000, Shuafat is a crime-ridden place, piled high with weapons and untreated waste.

Adaween left Shuafat a few years ago. She is now a biology student at a Ramallah University.

Adaween’s childhood stories are similar to those of kids growing up all over the world. Like all other kids in the neighborhood, who were afraid to come because they thought it was haunted or were playing “Arabs and Israeli soldiers,” until the night it stopped being a game.

“They were banging on the door. When I saw them arresting my brother, I started crying and my mother started crying. I thought that they were going to shoot us, that we were all going to be killed,” Adaween.

Raids were common as were homemade laboratories where dealers sold synthetic drugs.

Shuafat is a camp that fell through the administrative cracks. Some say there’s no way of improving the conditions and some speculate the next Palestinian uprising will explode from here.

Adaween has fond childhood memories, but seeing Shuafat through 23-year-old eyes, she said she is not sorry for leaving.