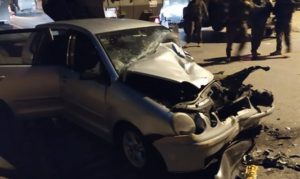 When the raid was over, a vehicle drew up alongside the forces, apparently in an attempt to run them down. The car plowed into the Border Police’s armored car and sustained major damage. The forces spotted the suspicious maneuver and noted that the Palestinian was holding something that appeared to be a knife, and opened fire, wounding him.

The would-be attacker is reported to be a resident of east Jerusalem.

After the incident, riots broke out in the camp. Protesters threw rocks and Molotov cocktails at the Border Police, who used crowd dispersal measures.