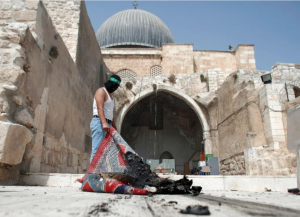 Is Al-Aqsa really as sacred as described, if the Palestinians use it to store rocks to incite violence, and is the filth & destruction caused worth repelling the ‘filthy infidels’?

The latest Temple Mount rioting during Rosh Hashanah has demonstrated once again that Muslim holy places are regularly used in service to militant Islam.

The cinder blocks and rocks piled up inside the Al Aqsa Mosque (Islam’s third holiest site) that turned prayer carpets into filthy rugs are a vivid reminder of the stark differences between the Muslim and Christian concepts of the sacred. From a Muslim point of view, dirty carpets are a small price to pay in the heroic effort to protect the holy place from the much greater filth of infidels.

On October 17, 2014, Palestinian leader Mahmoud Abass called upon fellow Muslims to do whatever they could to prevent the entrance of Jews to the Temple Mount. The reason given was that “they have no right to enter them and they have no right to defile them [the mosques].”

Similarly, on Rosh Hashanah of 2010, state-run Palestinian television aired a “documentary” in which the narrator stated, “They [the Israelis] know for certain that our [Palestinian] roots are deeper than their phony history. From our balcony we watch the [Islamic] sacredness as well as sinfulness and defilement [Jews praying at the Wailing Wall].”

This fear of Jewish defilement appears regularly in Palestinian political cartoons like the one bellow, entitled “Al-Aqsa is being raped.” Palestinian Media Watch (PMW), an Israeli research institute monitoring Palestinian media and society, has no shortage of work translating such hateful messages about the Jews.

Muslim anxiety over the presence of Jews on the Temple Mount has been fueling hatred of Israel since as early as the 1920s.

During the time of the Ottoman Empire, the Western or Wailing Wall carried little, if any, religious significance for Muslims. The first to claim the Wall was somehow meaningful to Muslims was Haj Amin Al-Husseini, who responded to the free access Jews had to the site under British rule by trumpeting the claim it was here that Mohammed had tied his miraculous flying steed, Al-Buraq, during his alleged nighttime journey from Mecca to Jerusalem.

Al-Husseini’s purpose in exploiting an otherwise marginal site for Muslims was to motivate the Arab world to fight against the Jews, whom he portrayed as conspiring to destroy Al Aqsa. His plan scored its first success in the 1929 pogrom, which erupted following rumors that the Jews were planning to build a temple in place of Al Aqsa, beginning with the Western Wall. Hundreds of Jews were killed, wounded and dispossessed during this horrendous event.

The same rumor is operating today, and is serving well the Muslim Jihad against Israel. The long history of alleged plans to rebuild the Temple and the recent riots on the Temple Mount would suggest a likely outcome in which Muslims, not Jews, will in their exaggerated effort to spark conflict themselves be responsible for the destruction of the mosques referred to by the Prophet Daniel as the “abomination of desolation.”