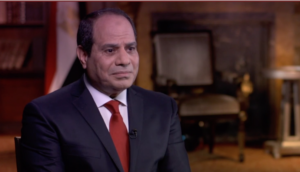 The group was headed by the founder of the commission, Ezra Friedlander, an ultra-Orthodox consultant and lobbyist from New York who spearheaded efforts to have the award granted to Sadat. This required the passage of a bill that needed to be sponsored by two-thirds of Congress and was signed by US President Donald Trump in December.

“President Sisi spoke fondly not only of Egypt’s past vibrant Jewish community, but also said that should there be a resurgence of the Jewish community in Egypt, the government will provide every religious necessity required…  that was a very warm embrace,” he said.

Sisi’s comments came a couple of weeks after the United Arab Emirates officially recognized its small Jewish community, in a move seen as an effort to present itself to the West as a country that is tolerant of other religions. While there was never a historical Jewish community in the UAE – although there is now a small synagogue in Dubai – the Jewish community in Egypt extends back to antiquity. Before the establishment of Israel in 1948, an estimated 75,000 Jews lived in the country. They were expelled in the 1950s, and only a handful of Jews are believed to live in Egypt today.

The commission’s founder said that Sisi also promised to clean up the ancient Bassatine Cemetery in Cairo, a cemetery dating back to the ninth century and believed to be the second-oldest Jewish cemetery in the world. In December, Sisi also announced a multimillion-dollar project to restore Jewish heritage sites in Egypt.

Friedlander said that the goal of the commission that pushed for the medal for Sadat was to “remind the world that great statesmen do exist.”

The meeting with Sisi, he said, was meant “to underscore the great importance we members of the American Jewish community place on enhancing ties between the United States and Egypt. President Sisi is a leader in the Arab World who understands the importance of moderation and inclusion, and is probably the glue that keeps the Middle East stable.”

“I remember going to my neighbors and watching that,” he said. “That iconic image was etched in my memory.” Now, Friedlander said, “I fervently believe that it is the role of American Jews to publicly ally themselves with President Sisi.”

Friedlander said that neither he nor anyone in his delegation brought up with Sisi concerns about human rights violations in Egypt.

“In that part of the world, people misuse the term ‘human rights’ – and use it as a way of overthrowing one government and replacing it with another one without any semblance of human rights,” he said, pointing to the 1979 revolution in Iran that led to the fall of the shah and the beginning of the Islamic revolution under Ayatollah Ruhollah Khomeini.

“No one will convince me that those calling for human rights [in Egypt] are doing the world a favor,” he said. “I think Sisi should be embraced in the West, by the administration and every member of Congress as a strategic ally of the US.”

He quoted Sisi as saying that if he does not get US support, the Muslim Brotherhood could regain power in the country. Sisi, Friedlander said, “is clearly looking for support in the United States, and I think it is our moral duty to support him to the greatest extent possible.”

Among others in the delegation that met Sisi were Shafik Gabr, an Egyptian industrialist; Isaac Dabah, the CEO of Delta Galil Industries which operates four plants in Egypt; and Tzili Charney, the widow of Leon Charney, who was an adviser to some of the negotiators during the Camp David talks that led to the Israeli-Egypt peace treaty.