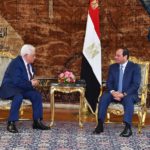 Palestinian autocrat Mahmoud Abbas flew off to meet Egyptian President Abdel Fattah el-Sisi in Sharm el-Sheikh after news that Hamas may have secured an Egyptian orchestrated agreement to end ‘March of Return protests’ on Israel’s border, but without Abbas’ involvement.

Palestinian President Mahmoud Abbas and Egyptian President Abdel Fattah el-Sisi met in Sharm el-Sheikh on Saturday to discuss the “Palestinian issue” among other things, an official confirmed on Thursday.

Abbas arrived in the coastal resort city on the edge of the Red Sea on Friday to attend the World Youth Forum in Sharm el-Sheikh amid ongoing attempts by Cairo to reconcile Hamas and Fatah. Continue Reading »