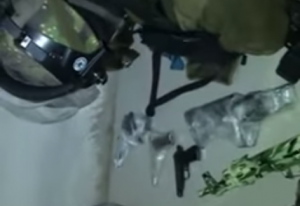 The arrest was made following an investigation which was conducted by the Central Unit of the Judea and Samaria District, that dealt with a large scale weapons trafficking.

During the undercover investigation, evidence was collected linking to the detainee committing these offenses. The arrest took place by the Israeli Counter-Terrorism Police Unit (Yamam) and Israeli Border Police.

Police further noted that during the interrogation, the detainee incriminated himself to the offenses attributed against him. His detention was extended until Tuesday.

During the course of the provisions 8 other suspects were arrested and police added that further arrests are planned.