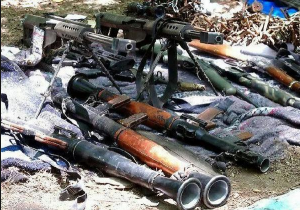 Having attacked the Egyptian army last summer after they intercepted an arms cache in route to the Gaza smuggling-tunnels, ISIS took the illegal weapons – but told Hamas the supply had been destroyed in their attack on the Egyptian Army.

An Islamic State (ISIS)-affiliated group may have taken the upper hand in the ongoing struggle for power in the Sinai desert and Gaza, a report revealed Monday.

The Sinai has recently witnessed some of the heaviest fighting between security forces and Islamists since the army ousted President Mohammed Morsi of the Muslim Brotherhood in 2013.

Since then, Egypt has waged war on terror in the region – including against Hamas, which has close ties to the Brotherhood – and seized a Hamas weapons cache there this past summer, Yediot Aharonot reports.

But just a few days after Egyptian forces seized the convoy of arms for Gaza, Ansar Bayt al-Maqdis – the Sinai group which pledged allegiance to ISIS last year – mounted a large-scale attack against Egyptian forces using weapons similar to the cache, sources revealed to the daily.

Analysts estimate that the group seized the Hamas weapons convoy shortly after Egypt acquired the cache, and then used them for their own ends despite telling Hamas the cache had been destroyed.

The revelation surfaces just days after ISIS’s Sinai commander entered Gaza for talks with Hamas. Hamas is being aided by ISIS in order to smuggle in weapons through the cross-border tunnels that Egypt’s army has not yet destroyed, and in return is providing Sinai Province with advanced weapons such as Cornet anti-tank missiles which ISIS has used in Sinai against Egypt – including against an Egyptian patrol ship.

In July, Israel announced it had information that Hamas had supplied ISIS with the weapons it used in a particularly brutal attack on Egyptian soldiers that left over 70 dead. Likewise, Hamas commanders were revealed as having supplied organizational support in the attack.

Days after the revelation, a senior IDF officer said Hamas was cooperating with Sinai Province to keep its influx of weapons going through smuggling tunnels, and prepare for its next war against Israel.