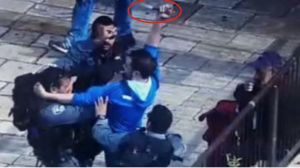 Israel Hayom newspaper reported on Sunday night that Prime Minister Benjamin Netanyahu’s cabinet will likely approve a deduction in tax revenues relative to the amounts the PA allocates for stipends given to Palestinian prisoners in Israeli custody.

In July, Israel’s parliament passed a law requiring a decrease in tax transfers to the PA unless welfare payments to Palestinian security prisoners and their families stopped.

According to the report, Israel’s defense establishment is in the “advanced stages” of compiling data on PA payments to determine how much funding will be withheld. Once the defense ministry report is complete, it will be subject to the cabinet’s approval.

Israel views the Palestinian government’s refusal to end the payments as evidence of its continued support for terrorism against the Jewish state.

The PA says the payments are a form of welfare to the families who have lost their main breadwinner and denies it seeks to encourage violence.

The PA demanded the funding stop at the end of January for fear it could expose the Palestinian government to costly lawsuits under the US Anti-Terrorism Clarification Act (ATCA), which came into force on February 1.

“The money will be cut off,” senior Palestinian official Saeb Erekat told AFP in the West Bank city of Ramallah.

“We don’t want to receive any money if this will take us to court.”

The ATCA legislation passed by Congress last year provides for any government that receives funding to be subject to US counter-terrorism laws.

The legislation was introduced as a response to the numerous multi-million dollar lawsuits rejected by American courts last year and affirmed by the Supreme Court that such cases were outside of their jurisdiction.

A series of punitive measures have been taken by the Trump administration against the Palestinians, who have been refusing to play ball with the US’s efforts to negotiate a peace deal with Israel.

Ramallah has refused to take part in any US-led negotiations after the US moved its embassy from Tel Aviv to Jerusalem and recognized the holy city as Israel’s capital.

At the end of January, the US Agency for International Development (USAID) is expected to lay off half of its West Bank and Gaza operation employees in the coming weeks before shuttering the mission completely in early 2019, the Haaretz daily reported last week.

According to the report, the humanitarian agency was informed by the US State Department last week that it would have to present a list of 60 employees to be let go by next month as part of the first phase in shutting down the operation.

In August, the Trump administration announced it was slashing millions of dollars in support to the United Nations Relief and Works Agency (UNRWA), accusing the Palestinian aid agency of perpetuating the Middle East conflict by perpetuating the idea that millions of Palestinians are refugees with a right to return to homes in what is today Israel.

Millions of dollars have also been cut for bilateral aid to the Palestinians for projects in the West Bank and the Gaza Strip, including to hospitals in east Jerusalem.