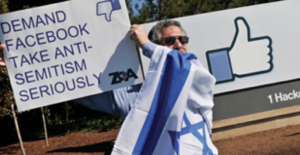 Facebook CEO Mark Zuckerberg gave an impassioned defense Thursday of his company’s policy of allowing a wide spectrum of speech on the platform. Speaking at Georgetown University in Washington, D.C., Zuckerberg invoked the First Amendment and the civil rights movement to defend his refusal to limit inflammatory discourse on his social media giant.

“Some people argue internet platforms should allow all expression protected by the First Amendment, even though the First Amendment explicitly doesn’t apply to companies,” Zuckerberg said. “I’m proud that our values at Facebook are inspired by the American tradition, which is more supportive of free expression than anywhere else.”

But Sacha Baron Cohen, who knows something about irreverent speech himself (see: “Borat,” “Ali G,” “The Dictator” and nearly every other film role he has ever played), says that Zuckerberg should take his role more seriously as the CEO of a private company.

If he owned a fancy restaurant and 4 neo-Nazis came goose-stepping into the dining room and were talking loudly about wanting to kill “Jewish scum”, would he serve them an elegant eight course meal? Or would tell them to get the f**k out of his restaurant? It’s the same thing.

“Just heard Mark Zuckerberg’s disingenuous speech. He is not the government, but the owner of a private business and not subject to the 1st Amendment!”

The coward #MarkZuckerberg‘s disingenuous speech defending a wide berth for 1st Amendment (when not applicable for pvt businesses) is to cover his a$$ since it’s too expensive for @Facebook to monitor, delete & respond to racial hate speech etc.