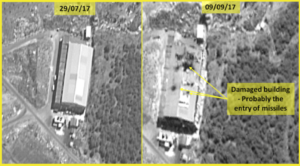 A statement from the Syrian army said that Thursday’s strike took place near the town of Masyaf, about 25 miles north of the Lebanon border, and warned against the “dangerous repercussions of this aggressive action to the security and stability of the region.”

‘Before & After’ images show the Syrian facility before and after last week’s airstrike – Photo: ImageSat International

“Israeli warplanes at 2:42 a.m. today fired a number of missiles from Lebanese airspace, targeting one of our military positions near Masyaf, which led to material damage and the deaths of two members of the site,” the Syrian statement said.

Israel has refrained from commenting on the strike. A military spokeswoman declined to discuss Syrian media reports, saying the IDF does not comment on operational matters.

The images, taken by a satellite operated by the Israeli company ImageSat International, show the strike, which took place overnight last Wednesday. The pictures also show the proximity of last week’s target to the Russian S-400 missile defense battery, as well as its proximity to an Iranian factory under construction.

The images show the heavy damage to the structures targeted, including buildings used for manufacturing and storage.