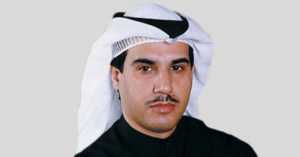 Saudi journalist exposes backstory on Jordan and its sidekick, the Palestinian Authority: “Both have benefited from the Arab-Israeli conflict. While Palestinian children die to become “martyrs,” Jordan’s king cruises the Mediterranean in his yacht and Abbas’ sons are likely to be found vacationing in Nova Scotia.”

The Kingdom of Saudi Arabia has taken a very open stance of seeking better ties to the Jewish people and to Israel. Some call this “normalization.” I call it plain common sense.

To begin, Saudi Arabia has always been a force for stability. We have always sought peace, not war. For example, when Saddam Hussein occupied Kuwait in 1990, the late King Fahd bin Abdulaziz did everything to avoid a war. Our country is prosperous; our people enjoy the luxury and welfare secured to us by mineral resources and a young crown prince who thinks outside the box. People as fortunate as we have everything to gain from seeking peace, not war. Why die when life is so good?

Saudi Arabia is strong – financially, politically and militarily. We have the second-largest air force in the Middle East. We operate tactical fighter aircraft like the F-15 that provide air superiority and we have advanced long-range missiles system. Iran knows this. Nonetheless, we see Israel as a logical future partner for us as we have mutual enemies: Iran, the Muslim Brotherhood, al-Qaida, and a handful of reckless rulers who remain in power in our region.

Nonetheless, Saudi Arabia’s quest for peace with Israel is not all smooth sailing. There is a major issue of contention: the future of the Palestinians and their right to self-determination. It is important and logical to us that Palestinians should have a state at the end of a peace process. Also, anti-peace forces litter our region. An example of that is, sadly, the Kingdom of Jordan. Jordan’s state media and state-controlled writers have been attacking Saudi Arabia ever since the latter began seeking improved relations with Israel.

Jordan’s sidekick, the Palestinian Authority, has been doing the same. Palestinian intelligence officers close to PA President Mahmoud Abbas have been insulting Saudi Arabia and its king. This by itself is an act of severe humiliation to Saudi society, which sees King Salman as a father figure.

The smear campaign against Saudi Arabia is systematic, well-financed and carefully orchestrated by the Jordanian government and the Palestinian Authority. They do this for a good reason: Both have benefited from the Arab-Israeli conflict. While Palestinian children die to become “martyrs,” Jordan’s king cruises the Mediterranean in his yacht and Abbas’ sons are likely to be found vacationing in Nova Scotia – the preferred destination, I am told.

But the bigger question remains: How can we achieve peace if the Palestinian people remain without a place to call home?

The answer is simple: Jordan is already 78% of historical Palestine. Jordanians of Palestinian origin are more than 80% of the population according to US intelligence cables leaked in 2010. Jordan is essentially already the Palestinian Arab state. The only problem is, the king of Jordan refuses to acknowledge this. Nonetheless, the world will eventually recognize Jordan as the place for Palestinian statehood. It could be sooner than we think. 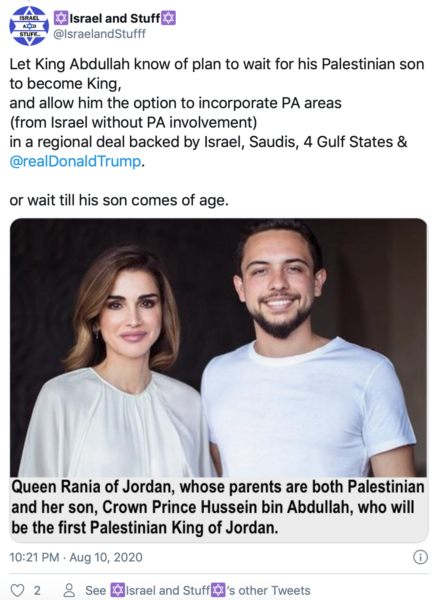 As for Al-Aqsa Mosque, we have been financing it for over 70 years now. Saudi Arabia has donated billions of dollars to Jordan’s king and his father and grandfather all in the name of “protecting” and “maintaining” Al-Aqsa. A quick look on the holy site is enough to show everyone that the king of Jordan has neither been maintaining or protecting the site. The mosque is in a miserable state and unrest is always stirred by the king’s appointed guards and loyalists. 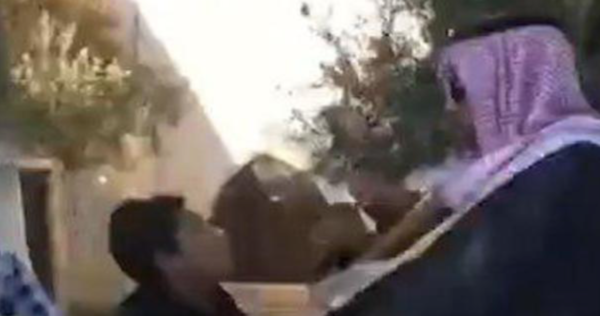 Waqf guards, appointed by the Jordanians to protect the Holy Site, do nothing as a Visiting Saudi blogger, Mohammed Saud, is spat at by a Palestinian youth on the Temple Mount in Jerusalem. – Screenshot: YouTube/Ynet

We don’t need this, nor do the Israelis and Palestinians. Instead, Saudi Arabia could offer the proper custodianship for Al-Aqsa under a new arrangement that secures the freedom of worship. Our country has managed the Holy Shrines of Mecca and Medina for almost 100 years now, in the most efficient fashion. We welcome Iranian pilgrims and offer them generous services despite Iran’s hostility and the fact that they belong to the Shiite sect.

We have a history of tolerance and efficiency when it comes to running holy sites. And our intervention in Al-Aqsa could solve endless problems for the Palestinians and Israelis alike.

Our message, as Saudis, is clear to everyone: We want a fair, just, lasting, and prosperous peace for the region. We want prosperity instead of misery, stability to replace unrest, and love to eradicate radical ideology. This could never be done without extending a peaceful hand to the Israelis.

I wish only to add that BEFORE the era of ‘Political Correctness,’ the previous King of Jordan, a great and brave leader, and his brother the then Crown Prince, were not afraid to speak the truth: 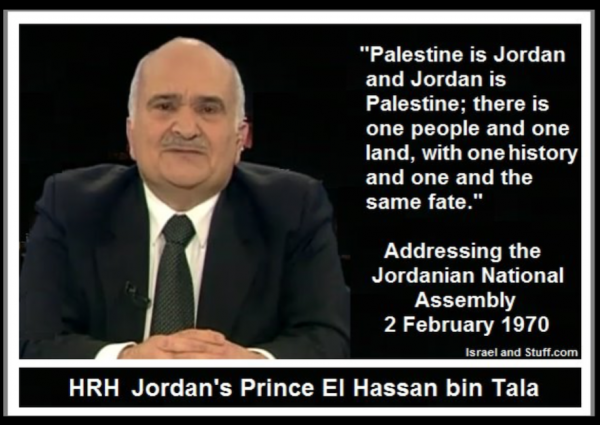 So…. here’s the story ‘in a nutshell’:
The Jordanian King does nothing to end the conflict, because as long as it continues, the Palestinian’s eyes are on Judea & Samaria (aka the West Bank) and not the ‘East Bank’ (aka Jordan).

The Palestinian leaders have learned from Arafat’s revelation that the ‘Arab-Israel conflict’ is a ‘Golden Goose’ funneling money from 1000 donors into one PLO bank account.

In June of 2007, Hamas initiated a coup d’état against Fatah in Gaza to ‘get a piece of the Golden Goose’… since Hamas was not a member in the Fatah controlled PLO.

The Palestinian conflict has metamorphosed into a money making business for the PLO, Fatah & Hamas leadership….all billionaires or very, very close to it. It is no longer what it was up to the 1970’s….’a religious war.’

But the leaders stoke religious hatred to perpetuate the conflict.

As an inducement to maintain continued violence, they publicly advertise a ‘price list’ a murderer of Jews will receive each month in perpetuity. 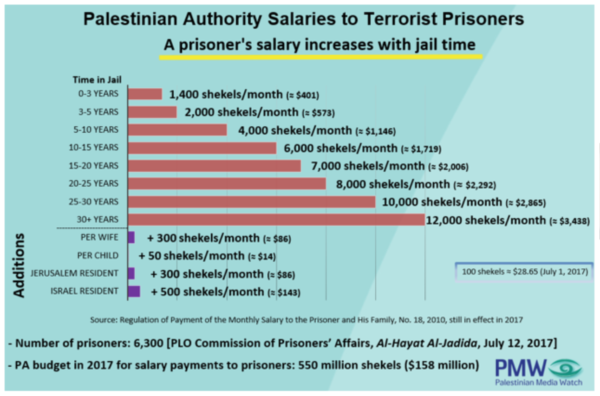 This is known as “Pay-to-Slay” Jews.

These would-be-killers get a monthly pension far higher than the average salary most Palestinian make. Far higher.

So… the Palestinian leaders purposely incite & induce for the killing of Israelis. That violence will always cause a response by Israel’s security apparatus.

The media gave up decades ago reporting Palestinian terrorism… suicide bombers, knife attacks, vehicular attacks, and now rocket attacks and incendiary balloons or kites that land in Israel, exploding on impact, burning untold acres of farmland, neighborhoods and public lands. BUT, the media is very happy to report on Israel’s response.

That anti-Israel media coverage is used to pitch to Christian countries worldwide how they’re in pitiful shape following Israeli retaliation and how they’re in dire need ‘humanitarian aid.’

As long as the money flows into the PLO coffers, there will never be an incentive to peace. The leaders pay their ‘lieutenants’, their ‘soldiers’ (fellow party members)…just like a mafia ‘family’, as well as funneling funds clandestinely to clan members, their children & grandchildren.