Mother of one of the kids says the children were scared and crying.

An Egged bus shuttling children to school was pelted with stones and a bottle of paint on Sunday morning while driving by the Ras al-Amud square in East Jerusalem. 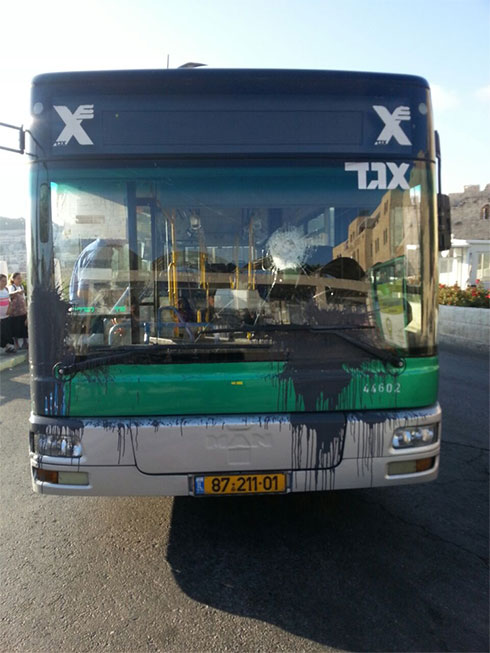 Damage caused to the bus from stones and paint bottle thrown at it.

Damage was caused to the bus’ windshield and Border Police forces were searching the area for the perpetrators.

Yonatan, one of the children on the bus, told his Mom the experience was “really scary.”

“They were really frightened,” Tehiva Shaham, Yonatan’s mother, said. “The children were crying and there were adults trying to calm them down. This is the first time this is happening to my son, but unfortunately the children are familiar with this reality. There are rock-throwing incidents like this all the time.”

Rock-throwing in the Palestinian neighborhoods in the capital has turned into somewhat of a routine in recent weeks.

Last week, a bus shuttling students from the south was stoned near the Tomb of Samuel, and on Tuesday, a 44-year-old was lightly wounded from stones thrown at his car in Beit Hanina.