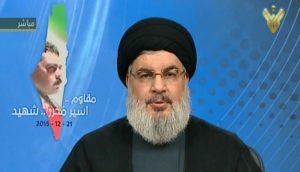 The report did not indicate when the meeting took place. It said that the unidentified “senior” Russian military official delivered a letter on behalf of Russia’s leadership, without identifying the specific source of the message.

The report also did not indicate what type of role the Russians hope Hezbollah will take on in Syria, but the reported message would be the first time Russia has acknowledged the Iran-backed Lebanese militia as a major player in the Syrian conflict.

The report comes just one day after a US and Russian brokered ceasefire in southwest Syria went into effect, mean in part to ease concerns from neighboring Jordan and Israel about Iran’s long-term military ambitions in the area.

Hezbollah has been advancing into southern Syria as part of their fighting alongside Syrian government forces in support of President Bashar Al-Assad, which is fighting to regain the territory from rebel groups.

But Israel and Jordan have expressed concern that Iran is pursuing a broader agenda, hoping to stake out a permanent presence in the region through Hezbollah, including creating a land route through Syria that would connect Iran, Iraq, and Lebanon.

The ceasefire was meant to prevent further advances in southern Syria by any force, though it was unclear whether Iran and the Lebanon-based Islamist group would comply as they were not involved in the agreement.

A US official told The Associated Press that Israel was “a part” of the agreement, but did not elaborate. Israeli daily Haaretz reported on Friday that while Israel was not directly involved in the talks to hammer out the ceasefire, senior Israeli officials were briefed on them.

According to the report, Israel was adamantly opposed to Iran’s ally Russia monitoring a ceasefire and argued that the United States should be in charge of enforcing any agreement.

In a weekly cabinet meeting on Sunday, Israeli Prime Minister Benjamin Netanyahu stated that, “Israel will welcome a genuine ceasefire in Syria, but this ceasefire should not allow the military consolidation of Iran and its satellites in Syria in general, and in southern Syria in particular.”

He added that he had in-depth talks with Putin and the US Secretary of State Rex Tillerson and that they would consider Israel’s demands.

“We will continue to monitor what is happening beyond our borders, while steadfastly insisting on our red lines: preventing the strengthening of Hezbollah against Syria, with the emphasis on supplying precision weapons, preventing Hezbollah from grounding near our border, or establishing Iranian military consolidation in all of Syria.”