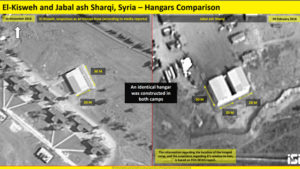 Israel’s bombing of the T-4 airbase in Syria last week, that also killed Iranian officers, was Israel’s first direct engagement after Iran ‘changed the rules’ when Iranian soldiers launched an armed drone to Israel from Syria’s T-4 airbase
– IDF official: Israel is now in direct conflict with Iran, no longer fighting through proxies.

A senior Israeli military official confirmed that Israel’s air force was responsible for last week’s bombing of the T-4 airbase in Syria last Monday, adding that the conflict between Israel and Iran had entered a new phase of direct confrontation.

While Israel never officially claimed responsibility, US officials told NBC News that Israel had consulted with the US prior to the attack. Prime Minister Binyamin Netanyahu seemingly alluded to Israel having undertaken the attack in a speech in Sderot, saying “We have one clear and simple rule and we seek to express it constantly: If someone tries to attack you – rise up and attack him.”

According to a senior Israeli security official quoted by The New York Times Sunday night, Israel targeted Iranian forces stationed at the T-4 base, adding that the strike was the first direct attack by Israeli forces on the Iranian regime.

While Israel and Iran have been in conflict since the 1979 Islamic revolution, combat between the two was conducted through proxies, including the Assad-led Baathist regime in Syria, Hezbollah terrorist group in Lebanon, and the Hamas terrorist organization in the Gaza Strip.

Seven Iranian personnel were killed in Israel’s strike on T-4.

“It was the first time we attacked live Iranian targets — both facilities and people,” the source said.

The comments join a statement made by IDF spokesman, Brigadier General Ronen Manelis, who said on Friday that an Iranian drone operated from T-4 which had violated Israeli airspace in February was en route to carry out an attack on Israeli forces, and was not merely on an information-gathering mission.

“This is the first time we saw Iran do something against Israel — not by proxy,” the senior Israeli security official told the Times. “This opened a new period.”

Israel responded to the incursion into its airspace by the Iranian drone with a series of airstrikes by F-16I fighter jets on the T-4 facility. One F-16I was damaged by a Syrian surface-to-air missile, forcing the pilot and navigator to eject. Both were recovered inside Israeli territory.