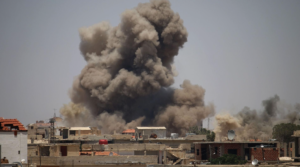 A Syrian refugee who recently fled the southwestern city of Daraa in Syria—along with tens of thousands of others—amid the fierce fighting in the area that has precipitated the flight of some 160,000 Syrians to the Israeli and Jordanian borders, has praised Israel’s “noble stance” for the succor it has offered to the suffering refugees.

“We saw a very noble stance by the Israeli side, both by the aid that it sent and in its treating of the wounded,” said a man, identified as Sa’id, who escaped the village of Giza located on the outskirts of the Daraa province as Syrian government forces widened a major offensive against rebels.

Six Syrians, who were moderately-to-seriously wounded in the battles between the Syrian army and rebels in the southern part of the country, were transferred by the IDF to hospitals in Israel for treatment over the weekend.

Among the Syrian wounded are four children aged 6 to 14, whose families were reportedly all killed in the fighting.

On Friday night, the IDF Northern Command’s medical forces were called to the border fence in the southern Golan Heights, where they provided the wounded Syrians with life-saving initial treatment in the field.

Sa’id also looked to Israel to try and persuade other countries in the region to open their borders to enable to fresh wave of asylum seekers to take shelter.

“We hope that Israel will exert pressure on the regional states to open their borders for us,” he told Ynet, disappointed with Jordan’s refusal to grant them entry—a position that was immediately declared as Syrian President Bashar Assad’s bombardment began.

Assad launched the offensive on Daraa in an attempt to recapture the city which has served as a hotbed of rebel activity since they began their uprising against him seven years ago.

Sa’id shared with Ynet the plight that has befallen the city’s residents since Assad unleashed his forces on it, and told of the arduous journey that he and his wife had been forced to embark upon since escaping their home, now transformed into a war zone, last week carrying only a few items of clothing on their backs.

According to Sa’id, he and his wife headed to the village of Nassib while under the constant bombardment of Russian aircraft and by relentless assaults launched by Assad’s army.

Assad’s forces, he said, deliberately targeted civilians, adding that he does not know what happened to his family.

“When my father tried to escape the village they (Assad’s army) fired warning shots at him and he was forced to return (to the village),” Sa’id said.

After arriving at the Jordanian border, Sa’id said that practically no aid was forthcoming.

“When we got to the border with Jordan we waited for a few hours. The Jordanians stood opposite us and saw us. At a certain point they sent a drone to learn about the field and a Syrian ambulance entered Jordanian territory in order to treat an elderly woman. But apart from the ambulance, Jordan did not allow us access to any kind of aid,” he lamented.

Amman, already preoccupied with resolving an economic crisis prevailing throughout the country, has stood firm on its decision to refuse the asylum seekers entry.

On Saturday night, it was reported that Jordan had decided, however, to send humanitarian aid to the now-homeless Syrians, simulating actions taken by Israel, but only to those who remained on Syrian soil.

Sa’id also described the plunder by Iranian and Syrian forces that has accompanied the violence as Assad steamrolls through the city.

“Soldiers from Assad’s army and members of Iranian militias and others went into the houses in the villages in Daraa and looted everything that came their way,” according to Sa’id, who had received his information from eyewitnesses.

“They took gold jewelry belonging to the women. Those who remain in the villages in the area live in horrific fear and cannot leave their homes. Assad’s soldiers can enter their homes at any moment and take what they want,” he continued.

With the Assad regime on the hunt for anyone, including civilians, who has ever resisted or opposed his authority, Sa’id said that people who have escaped the war-torn country would choose death over return.

“They include doctors, journalists and activists. Anyone who opposed the regime is wanted,” he explained.

“There are people here who say that they prefer to commit suicide than return to live under Assad’s regime. We are simple people who just want to live in peace. We are not violent and we don’t like war.”