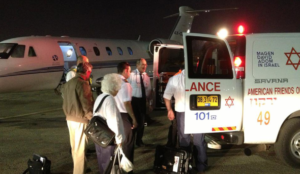 Doctors in central Israel performed a successful operation on Sunday on a Syrian baby who had been flown to Israel from Cyprus three weeks ago for urgent medical treatment.

The baby is recovering and is said to be in stable condition.

The baby in a special incubator on his flight to Israel in late December – Both Photos: Aviation Bridge (<— Visit website)

The baby was only three days old when he arrived in Israel to undergo a procedure to correct a serious congenital heart defect. The treatment was made available after the Cypriot Health Ministry reached out to Israeli Ambassador to Cyprus Sammy Revel and requested that he help bring the baby to Israel.

The Foreign Ministry, along with defense and security officials and the Border Crossings Authority at Ben-Gurion International Airport, informed Interior Minister Arye Deri and secured the necessary permits to allow the baby and his father – a Syrian refugee living in Cyprus – into the country.

Upon arrival, the baby was hospitalized in the Neonatal Intensive Care Unit at the Sheba Academic Medical Center Hospital at Tel Hashomer, where the surgery took place.