Schwarzenegger: “There is no white America – there is only the United States of America…. My dream is that all of you will join me in helping your favorite anti-hate organizations in any way you can.”

Schwarzenegger wrote an emotional Facebook post on Monday about the events of the weekend, woman was killed during a white supremacist gathering in Charlottesville, Virginia.

“I have been horrified by the images of Nazis and white supremacists marching in Charlottesville,” he wrote. Continue Reading » 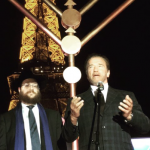 WATCH: After getting call from Chief Rabbi of France, the Hollywood megastar who’s in Paris for the climate change conference,  says at lighting, ‘the menorah means light. Light prevails darkness, good prevails evil.’

Hollywood superstar and former California Governor Arnold Schwarzenegger on Sunday night took part in a public Hanukkah candle lighting ceremony at the feet of the Eiffel Tower, for the first night of the holiday.

Schwarzenegger, who is in Paris to take part in the international Climate Change Conference and advocate for renewable energy, said he was invited to the annual lighting of the 30-foot-tall menorah, which is organized by Chabad-Lubavitch. Continue Reading »

Arnold Schwarzenegger, former California Governor, has gained the assistance of a prominent Jewish group upon hearing news of name added to ‘Hitler poster.’

Former California Governor Arnold Schwarzenegger has sought the assistance of the Jewish rights group the Simon Wiesenthal Center after the organization had alerted the acclaimed celebrity that his name is being displayed on a poster of historical figures and celebrities at a prominent mall in Istanbul, Turkey, that also prominently displays Adolf Hitler.

The poster, titled “Who Would You Like to Meet if You Could?” can be seen at the Sapphire Mall, an upscale mall in Istanbul. Continue Reading »