Buses to run in Jerusalem on Shabbat

The “Shabus” bus line will begin operating with 3 mini-buses from an east Jerusalem transportation company from 8 pm Friday night to 2 am on Saturdays.

The Cooperative Transportation Association of Jerusalem will begin operating its new “Shabus” program next weekend, introducing buses that will run between Jerusalem neighborhoods and the city’s nightlife destinations on Friday night.

Members of the Cooperative Transportation Association of Jerusalem holding signs for the new bus line that will run on Shabbat, called “Shabus” – Photo: Ori Katzman

Public transportation in the vast majority of Israeli cities does not operate on Shabbat. Continue Reading » Eleven people are reported to have been killed in the crash; 52 have been injured. Continue Reading »

The bus driver not only insulted a Holocaust survivor, he then violently shut the bus door on man’s wife, bruising her arm.

‘A Holocaust survivor, being called a Nazi in Israel! Every Israeli should be ashamed.’

A 74-year-old Holocaust survivor was told he was Nazi because he spoke Dutch while traveling on a bus to Tel Aviv.

Martin Leeda moved to Israel after surviving three Nazi concentration camps. Today he divides his time between Israel and the Netherlands, where he works as a guide in the Jewish Historical Museum in Amsterdam, and is an active part of the Jewish community there. Continue Reading »

Transportation Ministry director-general Uzi Itzhaki says that purpose of the additional lines is to aid those Palestinians who live in Judea & Samaria commute to their jobs inside Israel and rejects as ridiculous all claims that these new lines are some form of apartheid.

Palestinian workers board a bus en route to Judea and Samaria from the Tel Aviv area. – Photo: AP

Uzi Itzhaki, the Transportation Ministry’s director-general, rejected claims that new bus lines, which are meant mainly for use by Palestinians, are a form of apartheid. 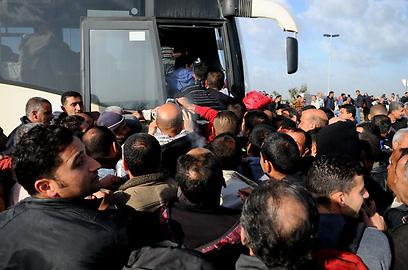 There were no reports of injury, and the police are investigating suspicions of arson.

Due to the incident, the company’s drivers were asked to remove all buses from the Arab town, fearing similar occurrences in light of the protest against the new bus lines. Continue Reading »

Transportation Ministry sets up new bus lines for Arab passengers in West Bank towns & insists the additional lines are for general public, even though only Palestinian villages have been advised of their schedules.

Racial segregation or transportation mitigation? The Transportation Ministry announced that starting Sunday it will begin operating designated lines for Palestinians in the West Bank.

The bus lines in question are meant, according to the ministry, to transport Palestinian workers from the West Bank to central Israel. The ministry alleges that the move is meant to ease the congestion felt on bus lines used by Jews in the same areas, but several bus drivers told Ynet that Palestinians who will choose to travel on the so-called “mixed” lines, will be asked to leave them. Continue Reading »

It was a scene typical of the times in Israel. On a Be’er Sheva bus carrying mostly elderly Jews, an Arab boy began singing out loud in a way that seemed calculated to convey his disdain for his fellow passengers.

Repeated attempts by passengers and the driver to get the boy to pipe down only resulted in more disruption, as the boy was joined by another, younger boy, in their annoying song.

Push came to shove, shove came to kick, and the boys were taken off the bus, which drove away – but not before the boys had thrown a rock that smashed a hole in the pane of one of its doors. Continue Reading »