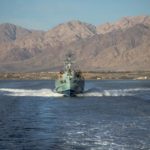 Tasked with protecting Israel’s borders & citizens, this photo essay of Israeli Navy’s 3 operational sectors, Haifa, Ashdod and Eilat presents the soldiers & vessels patrolling off the shores of the Jewish State, defending it against real threats from both sea & land.

Now, in this special photographic essay, the Navy has agreed to pull back the curtain and allow a rare glimpse at the vessels and people tasked with defending Israel’s maritime borders.

The Haifa theater is the name of the IDF’s naval division near the northern city, incorporating many units including the missile boat flotilla. Continue Reading »

An up close view of the #914 Patrol Boat Squad of the IDF’s Navy.

Haifa Navy Base. It’s just another standard day in the #914 Patrol Boat Squad, where various types of weapons are laid out for inspection after having been thoroughly oiled and cleaned.

After inspection, all weapons are reassembled and mounted on to the “Dvora” class patrol boat #814 which, as goes with an old Navy tradition, has the un-complimenting name – “The Monsters”.

#814 is leaving the harbor with the Commander of the #914 Patrol Boat Squad – Captain Yishai Cohen.  Cohen studied at the Kfar HaRoe Yeshiva High School before graduating from the Navy’s Academy. Continue Reading »

The IDF has cleared for publication Tuesday that an Israeli navy force, active in securing Israel’s waters, captured a foreign vessel at sea in December and took its crew in for questioning.

Weapons carried on the cargo ship ‘Victoria’ are displayed next to the docked ship at the port of Ashdod, March 16, 2011.- Photo: Reuters

On the basis of intelligence information, Israeli navy cruisers stopped a ship in Israeli water last December, possibly in connection to arms smuggling.

After stopping the vessel, the IDF arrested its crew members and took them in for questioning. Continue Reading »

IDF’s Navy shot & wounded a Gazan who refused orders to keep his fishing boat from entering waters under the maritime embargo.

Israeli naval forces shot and wounded Gaza Arab in waters off the northern Gaza coast on Monday after he refused to keep his fishing boat from entering waters under a maritime embargo, which allows fishing up to six nautical miles from the coast. The wounded man was taken to Israel’s Barzilai Hospital in Ashkelon for treatment.

As part of the ceasefire agreement that ended the Pillar of Defense counterterrorist operation against Hamas missile fire, Israel agreed to double the width of the fishing zone, which had been three nautical miles. Continue Reading »

A video posted on YouTube shows how armed and masked Israeli commandoes seized control on Saturday morning of the Finnish-flagged “Estelle” ship, which was headed to Gaza.

On Sunday the remand of the three Israeli activists who took part in the pro-Palestinian sail was extended.

Yonatan Shapira, Reut Mor and Elazar Elhanan are suspected of incitement, of knowingly aiding an enemy and of violating a legal order.

The Navy ship, outfitted with missiles, rushed out on the high seas after officials received an SOS call from the yacht ”Odelia” late Monday night.

Water began seeping in after the boat’s engine failed approximately 30 miles off the Lebanese coast.

The family had left the port of Haifa and was on the way to Cyprus, Voice of Israel government radio reported. Continue Reading »