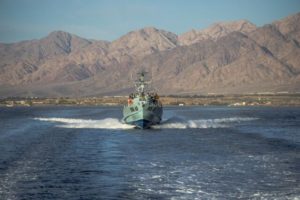 Tasked with protecting Israel’s borders & citizens, this photo essay of Israeli Navy’s 3 operational sectors, Haifa, Ashdod and Eilat presents the soldiers & vessels patrolling off the shores of the Jewish State, defending it against real threats from both sea & land.

Now, in this special photographic essay, the Navy has agreed to pull back the curtain and allow a rare glimpse at the vessels and people tasked with defending Israel’s maritime borders.

The Haifa theater is the name of the IDF’s naval division near the northern city, incorporating many units including the missile boat flotilla.

The missile boat flotilla, or 3rd Flotilla by its official name, operates night and day in every inch of Israel’s territorial waters, and beyond.

A nocturnal look at the Haifa bay from a crewman’s point of view – Photo: IDF Spokesperson’s Unit

The flotilla defends the country’s borders and strategic assets and contributes to Naval intelligence operations.The Lahav corvette, or small warship, is staffed by dozens of soldiers. The ship sails in and out of its home port of Haifa, allowing its crew a clear, unobstructed view of the Haifa bay in all weather conditions and times of day.

In addition, the Lahav often sets sail farther away, giving its crew glimpses of the spectacular vistas Israel has to offer in the region.

Squadron 916 is the Navy’s routine security operations squadron, entrusted with maintaining security along Israel’s southern theater, and its naval border with Gaza.

A crewman aboard a Navy ship across from the port of Ashdod – Photo: IDF Spokesperson’s Unit

As the squadron tasked with defending Israel’s “hottest” sector, the crew carries out training sessions and drills 24/7.

A particular Dvora’s crew consists of 15 sailors led by a commanding officer. When a Dvora patrol boat sails for its routine security operations, it runs just ten kilometers from the Gaza shoreline, carrying out its duty of ensuring the sector remains peaceful.

The sailors serving in the Ashdod theater’s Squadron 916 say the beauty of serving in that particular sectors is the peace and calm of the high seas on the one hand, coupled with the Israel Navy’s most operational sector on the other, which allows them to feel what they do is crucial to safeguarding their country.

The Red Sea theater may appear calm and tranquil at first glance, but it is, in fact, the Navy’s southernmost operational sector.

Its role is to safeguard Israel’s southern border, both naval and on land, and defend—both in routine and emergency situations—the residents of Eilat and the many tourists who frequent the popular holiday destination every year.

Lieutenant Tal Katz, 24, commands the Dvora 819 patrol boat. Katz said the challenge of the Eilat theater was the proximity between Israel’s naval borders there and foreign, potentially hostile elements, enabling enemy combatants to reach Israel within minutes.Soldiers serving aboard Dvora patrol boats in Eilat describe the view of the port of Eilat as seen from their ships as breathtaking, especially when the setting sun seems to almost merge with the ocean.