Israeli army spokesperson unit confirms IDF troops fired at a man in Gaza approaching the security fence with Israel, but not aware of other incident.

Gaza’s healthy ministry spokesman Ashraf al-Qudra claimed a 16-year-old youth was shot near the security barrier with Israel in Khan Yunis, according to AFP.

He also claimed a 36-year-old fisherman was shot while he was aboard his boat in the Mediterranean off Gaza City.

The IDF said it was not aware of the two incidents in question, but did say troops had opened fire at a Palestinian man who was approaching the security barrier on foot. Continue Reading »

After shutting down Gaza’s electricity plant to 1.8 million people due to fuel shortage caused by closed border when attack on Israel began, the Strip’s power station is back to full operation with Qatari-paid fuel.

The Gaza Strip’s sole power plant started up again on Monday after Israel allowed quantities of Qatari-paid fuel into the enclave to ease a power crisis, Palestinian officials said.

Gaza lacks much basic infrastructure and lives under an Egyptian-Israeli blockade meant to cut off arms flows but which also curbs imports of fuel and building supplies. Continue Reading »

IDF reports that dozens of Palestinians, refusing to heed orders to halt, entered a ‘closed security zone’ on Gaza’s northern border with Israel to riot.

The shooting occurred after Israeli forces killed two Palestinian militants in a Gaza air strike on Wednesday, blaming one of them for a rocket attack during the funeral of late prime minister Ariel Sharon earlier this month.Palestinian

This Palestinian hit by gunfire comes after 4 incidents of IDF soldiers opening fire on border ‘incidents’ over past weekend.

IDF soldiers fired at the legs of a Palestinian man attempting to plant an explosive on the Gaza – Israel border Monday.

The incident occurred on the border with northern Gaza. The man was hit by gunfire, though his condition remains unknown.

Over the weekend, the IDF opened fire on four separate occasions at Palestinians who entered the forbidden security zones near the fence and refused to vacate the area. Continue Reading »

As cold weather & flooding takes its toll on Gaza, Hamas & Fatah come to agreement for Israel to begin transferring fuel to the only power plant in Hamas-ruled Strip after a 50-day shutdown.

Raed Fatuh, a Palestinian Authority official in charge of the transfer of goods between Gaza and Israel, said Israel would be transferring 450,000 liters of fuel to the plant, which has been shut down for some 50 days. Continue Reading »

IDF coordinator of Gov’t Activities in Territories authorizes transfer of water pumps to Hamas due to heavy flooding in Gaza.

Israel set up a joint command center with Palestinian security in the West Bank to handle storm-related traffic and electricity problems. 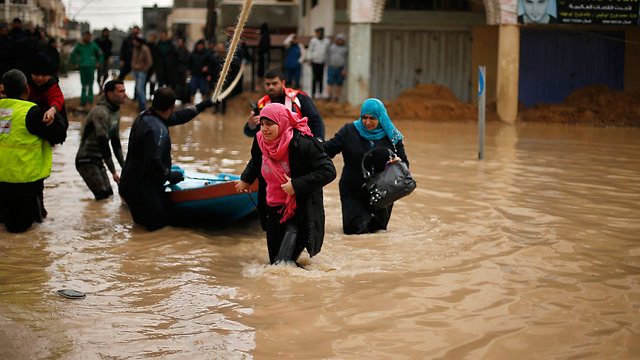 Coordinator of Government Activities in the Territories verified a Mekorot transfer of water pumps to the Gaza Strip due to heavy flooding across the strip.

The IDF said on Friday it had opened a crossing with Gaza in response to a UN appeal to let in aid supplies. Continue Reading »