Israel Tennis Association was ordered to compensate the Belgian team for inconvenience of postponing game one day.

The Israel Tennis Association has been fined more than $13,000 for refusing to play a Davis Cup match on Yom Kippur.

Israeli tennis player Dudi Sela, right, and Jonathan Erlich, left, wipe their faces as they listen to the advice of team coach Eyal Ran, during the first round of the Davis Cup, Feb. 2, 2013. – Photo: AP

BALTIMORE (JTA) — The first arrows Roxana and Rafael Gonzalez launch at the upcoming 19th Maccabiah Games will take flight from their fingertips, but also from Jeffrey Sudikoff’s imagination.

Thousands of spectators – religious & secular Israelis, Palestinians, & tourists – stand together to watch the fastest cars Jerusalem has ever seen.

Tens of thousands of Israelis, Palestinians, and tourists flocked Thursday for the first day of Formula One road show on the streets of Jerusalem.

The route of the Formula One “peace road show” in Jerusalem.

The exhibition, which included eight Formula One race-cars and a few motorcycles, is scheduled to continue on Friday. Jerusalem Mayor Nir Barkat, a fan of motor sports, initiated the bid for his city to host the world’s greatest race-car show. Continue Reading »

FIFA not bending to Palestinian pressure to sanction Israel

FIFA chief Sepp Blatter will meet with gov’t officials in Jerusalem & members of the IFA to try and come up with a compromise arrangement with the Palestinian players.

By Moshe Boker and Reuters

Anyone in Israel concerned that FIFA, the governing body of world soccer, was about to acquiesce to the demands of the Palestinian soccer federation and impose sanctions against Israel, can rest easy. 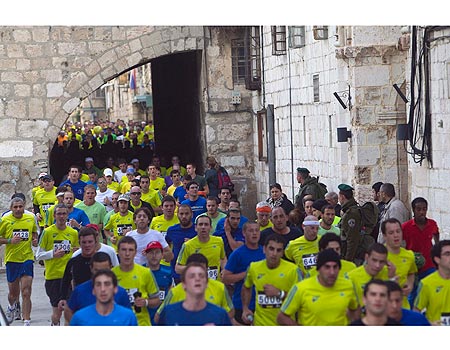 In a statement Tuesday, the Palestine Liberation Organization called on marathon participants and sponsors to withdraw their support. Continue Reading »

A group of pro-Palestinian activists occupied UEFA’s headquarters and met with its president Michel Platini on Friday to protest Israel’s hosting of the European Under-21 Championship.

Pro-Palestinian protesters at the UEFA headquarters, January 25, 2013. – Photo by AP

Protesters chanted slogans and carried banners and placards critical of Platini before some were invited into his office following a meeting of his executive committee.

Olivia Zemor, a spokeswoman for the group, said they told Platini that UEFA was “encouraging war crimes” by choosing Israel to host the eight-nation event in June. Continue Reading »

Fighter Yuri Foreman credits fellow Jews for reviving his passion for the ring after demoralizing loss.

Yuri Foreman, the Orthodox rabbi-in-training and former boxing champ, is on the comeback trail ? and he thanks his fellow Jews for giving him the inspiration to make it happen.

The one-time WBA world light middleweight champion returns to the ring in a non-title bout against Brandon Baue in New York on Wednesday, January 23. It will be Foreman’s first fight in New York since his devastating loss to Miguel Cotto at Yankee Stadium in June 2010.

“Jewish people are happy that I am coming back, they had been waiting, so it’s kind of inspiring, because it’s not just me,” he said. Continue Reading »