Becoming operational on October 1, Anne ‘Chani’ Neuberger, the NSA’s first Director of Cybersecurity, an Orthodox Jewish woman, will be reporting directly to the agency’s director, Gen. Paul Nakasone, on issues that will focus on defending the U.S. against foreign cyber-threats.

Anne Neuberger of Baltimore has worked at the NSA for the past decade. She helped establish the U.S. Cyber Command and worked as chief risk officer, where she led the agency’s election security efforts for the 2018 midterms. Continue Reading » 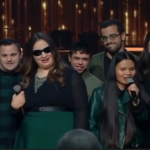 After posted on YouTube as a “Victory Dance”… “celebrating the mass murder of Arab men, women, & children. The mass rape & torture of young women & children,” it aroused anger on Jordanian social media & in the their parliament.

A group of Israeli Hassidim are being accused of carrying out a “ritual Talmudic dance” on Tuesday morning while waiting to board their plane in Queen Alia International Airport in Amman.

What was in fact a traditional Jewish circle dance, accompanied by guitar music and Hebrew singing, has morphed into a social media controversy in Jordan, and was considered so offensive to Jordanians that it had to be denounced in the Jordanian parliament. Continue Reading »

WATCH: So…who harasses the Jew walking in NYC for 10 hours?

The video clip, ’10 Hours of Walking in NYC as a Jew’ illustrates how comedian Scott Rogowsky was constantly being urged to daven, to ‘do a mitzvah’ and even to sniff an etrog!

An American Rabbi Pens, ‘The Bill of Rights of a Jewish Wife’

Rabbi Mendel Epstein from New York writes how he’s disturbed by the outrageous number of women who suffer from the “system” of divorce in the Orthodox community.

The 5 Towns Jewish Times wrote an article last week on the “proliferation of divorces” in the Jewish Orthodox community and on the current system that fails to protect women struggling to “navigate their way through difficult or bad marriages.”

The newspaper interviewed Rabbi Mendel Epstein of Brooklyn, New York, leader of a Jewish community, an experienced judge, and “to’ein”, the Hebrew term meaning “advocate” who represents on behalf of someone in front of a Rabbinical court of law. Continue Reading »

Hasidim looking to vacation on the Welsh seaside are scrambling to find alternate arrangements after Aberystwyth University banned the use of candles in its residences.

Hundreds of Orthodox Jews have vacationed in the resort for over two decades, according to The Telegraph. Hasidim have traditionally taken up summer residence in Petre Jane Morgan, a university housing complex across a footbridge from the main campus.

Mushav Shear Yashuv residents digusted to find haredi tourists bathing in a memorial fountain, which was dedicated to the 73 IDF soldiers who were killed in a terrible 1997 helicopter accident.

A fracas erupted Tuesday between tourists at a memorial for the victims of a military helicopter accident near the Galilee town of Shear Yashuv, after several haredim were caught bathing in the monument fountain.

Haredi tourists at the memorial for soldiers who fell in the 1997 helicopter accident, Tuesday – Photo: Arutz Sheva

The haredi tourists apparently stripped down to their bathing suits and decided to go for a swim in the memorial fountain, which was dedicated to 73 IDF soldiers who died when two military helicopters collided in the skies over Shear Yashuv in 1997.

The local Shomrim group, numbering 22 Jews, was set up in 2008 in part as a reaction to anti-Semitic incidents, have agreed to include the local mosques & other buildings as part of their routine patrols.

An Orthodox Jewish patrol group in London said it would protect a mosque after a rise in hate crimes against Muslims.

The Shomrim patrol group accepted a request for protection by the North London Community Centre in Cazenove Road, an Islamic institution situated in the heavily-Jewish Borough of Hackney in northern London.

Natan Sharansky, chairman of the Jewish Agency for Israel, will present a plan today to expand the Western Wall plaza in Jerusalem to include a new section for egalitarian prayer to American Jewish religious leaders, the Forward has learned.

Ultra-Orthodox Jewish men participate in a blessing during the holiday of Sukkot, in front of the Western Wall. – Photo: AP

If implemented, the proposal, a product of months of deliberation, would mark a dramatic acknowledgement by the state of Israel that prayer at the Wall — regarded as Judaism’s holiest site and a modern-day symbol of national sovereignty — should include non-Orthodox practice in which men and women pray together. Continue Reading »

Fighter Yuri Foreman credits fellow Jews for reviving his passion for the ring after demoralizing loss.

Yuri Foreman, the Orthodox rabbi-in-training and former boxing champ, is on the comeback trail ? and he thanks his fellow Jews for giving him the inspiration to make it happen.

The one-time WBA world light middleweight champion returns to the ring in a non-title bout against Brandon Baue in New York on Wednesday, January 23. It will be Foreman’s first fight in New York since his devastating loss to Miguel Cotto at Yankee Stadium in June 2010.

“Jewish people are happy that I am coming back, they had been waiting, so it’s kind of inspiring, because it’s not just me,” he said. Continue Reading »

El Al being sued by Florida woman over gender discrimination

El Al statement: “Flight attendants are at the service of passengers.”

A Florida woman reportedly is suing El Al for gender discrimination after she was forced to change seats to accommodate an ultra-Orthodox man.

Debra Ryder charged that a flight steward moved her to a seat in the back without her prior consent, Israeli media reported. The ultra-Orthodox man had refused to sit next to her and then moved into her aisle seat.

Ryder reportedly filed a lawsuit on Aug. 9 seeking some $12,500 in compensation, including for distress. She had obtained an aisle seat for medical reasons, she told Army Radio. Continue Reading »

OObama to U.S. Orthodox Jews: My administration is more attentive to Israel than to Palestinians

Obama told a White House meeting with leaders of Orthodox community that the window of opportunity for peace with the Palestinians might have already closed, but expressed hope that progress is possible.

U.S. President Barack Obama told a delegation of the U.S. Orthodox Jewish community at the White House on Tuesday that his administration is decidedly more attentive to Israel than it is to the Palestinians.

Obama was speaking at a meeting between White House Chief of Staff Jack Lew and leaders of the Orthodox Jewish community, including Dr. Simcha Katz, Rabbi Steven Burg and Nathan Diament of the Orthodox Union. Continue Reading »