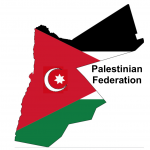 According to Israel’s left-wing daily, Palestinian Authority kleptocrat Mahmoud Abbas related to visiting Israeli lawmakers & peace activists that he responded positively to Trump’s peace-team suggestion that the PA join a confederation with Jordan.

“I was asked if I believe in a federation with Jordan,” Abbas said of talks held with White House senior adviser Jared Kushner and Middle East peace envoy Jason Greenblatt, according to Haaretz newspaper. Continue Reading »

Palestinians prefer federation with Jordan over independence under their leaders

Poll conducted by A-Najar University in Nablus, found 46% surveyed said they preferred a confederation with neighboring Jordan (where a majority of the population is “Palestinian” Arab) in place of an independent Palestinian state.

Is an independent Palestinian state really all that important to the local Arab population? Well, not exactly, at least not according to a recent Palestinian opinion poll.

The touted two-state solution seems to be more in line with the interests of Western powers than it is for Israelis and Palestinian Arabs themselves.

Conducted by A-Najar University in Nablus, the aforementioned poll found that just 18% of Palestinians believe the two-state solution will actually resolve the conflict, and most respondents opposed the scheme altogether. Continue Reading »