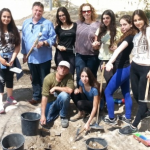 Dr. Daphna Ben-Tor, curator of Egyptian archaeology at the Israel Museum in Jerusalem, who identified the scarab amulet, added that “this is an Egyptian scarab from the times of the Ramses, the 19th Dynasty, the golden days of the pharaohs of Egypt.”

Tzipori (Sepphoris) in the Galilee has revealed another exciting find: On Tuesday, a group of young students participating in an archaeological excavation run by the Israel Antiquities Authority at the ancient site discovered an Egyptian amulet that is over 3,000 years old.

The Egyptian amulet dates back to the 19th Dynasty – Photo: Israel Antiquities Authority

Like so many important archaeological findings in Israel, the object was uncovered at a dig being conducted as part of preparations for an infrastructure project — in this case, a new access road. Continue Reading »

Before learning Hebrew as their common language, Valeva from Russia, & Louis of São Paulo fell in love and turned to Google Translate after moving to Israel as part of a science & technology scholarship program for high schoolers.

Nicole Valeva grew up in the city of Ufa near the Ural Mountains in Russia, while Louis Weinstein was playing soccer on the beach near São Paulo, Brazil. A year ago, when they were both 15, they left their native countries, their families and friends and made aliyah to Israel to join the World ORT Anières Elite Academy’s science and technology scholarship program. Continue Reading »

Herzl Schubert, a high school history teacher at a Ramat Gan school, was identified by parents as taking part in the violent attack on a single IDF soldier at Nabi Salah, when they viewed the video that’s currently going viral.

The parents said that they had spotted Schubert taking part in a violent riot at Nabi Salah, in Samaria, in which a group of women and children violently mobbed an IDF soldier.

Team from northern Israel with Robot named Rafiki awarded ‘Excellence in Engineering Award’ for its mechanical systems & excellent performance, beat 58 teams from all around the world in preliminary round.

By Ilan Gattegno
Team 1690 Orbit, the robotics team from the ORT Binyamina High School in northern Israel, has made it to the finals of the 2015 FIRST international robotics competition for high school students.

Team 1690 Orbit from Binyamina, whose robot, Rafiki, impressed the judges in the early rounds of the FIRST robotics competition

In a preliminary round held in Maryland, the ORT students’ robot, Rafiki, beat creations by 58 other teams from all over the world.

Israeli Teacher That Attacked IDF in Class Gets Canned

Adam Verete says he’s not sure if his sacking was connected to the controversy he aroused earlier this year.

Adam Verete, the teacher who caused a public storm when he told students before enlistment that the IDF was an immoral army, has been informed that he will not continue to teach next year at the ORT Kiryat Tivon high school, according to IDF Radio.

Verete told the military radio station that he was recently summoned to a hearing and told by the school’s management that the Jewish Thinking track in which he teaches will be shut down in the next school year. Continue Reading »