US envoy to UN Haley: UNHRC ignores those to whom they are appointed to protect

In an op-ed in the Washington Post Amb. Haley writes, “All too often…the victims of the world’s most egregious human rights violations are ignored by the very organization that is supposed to protect them,” called on council to “end its practice of wrongly singling out Israel for criticism,” curious “whether the Human Rights Council actually supports human rights” or whether it is “merely a showcase for dictatorships that use their membership to whitewash brutality.”

US envoy to the United Nations Nikki Haley told the UN’s Human Rights Council in Geneva on Tuesday that changes need to be made regarding the body’s approach to Israel. Continue Reading » 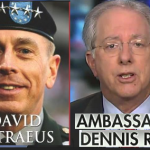 The Iran nuclear deal would be far more effective if the United States provided Israel with weapons capable of destroying the Islamic Republic’s atomic facilities, two former high-level US officials wrote in an op-ed for The Washington Post on Wednesday.

Dennis Ross, the former peace envoy and adviser on Middle East issues to a number of presidential administrations, and David Petraeus, the erstwhile Central Intelligence Agency director and former commander of US forces in Iraq and Afghanistan, argued in an op-ed that Washington needs to make clear that it will use force against Iran if it breaches “the nuclear threshold firewall” after year 15 of the Joint Comprehensive Plan of Action. Continue Reading »

Washington Post editorial raises 3 main concerns over potential nuclear deal with Iran.
• 2 are: The Obama administration would avoid confronting Iran & the White House hinted that they would implement future agreements without Congressional approval.

No deal has been signed between Iran and world powers yet, but the reports continuously leaking out of the negotiating rooms and the stern warnings being issued by Israel are making quite a few Americans wary of a possible bad deal. Over the weekend, the Washington Post ran an editorial titled “The emerging Iran nuclear deal raises major concerns” that leveled criticism at the conduct of the American administration. Continue Reading »

Though US President Barack Obama has yet to officially name Chuck Hagel as the defense secretary’s successor, several pro-Israel senators have already announced their objection to his nomination and said they would act to prevent it.

On Wednesday, the Washington Post joined the opposing voices in an editorial claiming Hagel was not the right choice for the position.

The reason stated by Washington Post was Hagel’s radical stand on Iran and the Middle East, which was clearly evident when he repeatedly voted against enforcing sanctions to halt Iran’s race obtaining nuclear weapon and doubted the use of force to compel it to negotiate. Continue Reading »