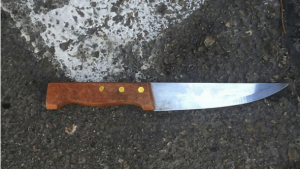 The abortive attack occurred between the Arab village of Bani Naim and industrial zone of the neighboring Jewish town of Kiryat Arba. An Arab terrorist, armed with a knife and intent on stabbing Israelis, lunged at soldiers.

One of the soldiers opened fire on the terrorist, neutralizing him before he managed to cause any harm. An IDF spokesperson later said the terrorist died of his wounds.

Two knife-wielding terrorists attacked a group of Israeli soldiers manning a checkpoint outside of the Tomb of the Patriarchs in Hevron Monday afternoon. One terrorist was killed on the spot, the other severely wounded. One soldier was lightly wounded in the incident.

A second stabbing attempt occurred in Hevron Monday evening. There were no injuries and the attacker was taken into custody.

Two police officers were wounded in an attack in Jerusalem Monday morning. A 38-year old female officer was stabbed in the neck and remains in serious condition, while a 45-year old male officer was moderately injured in the attack.