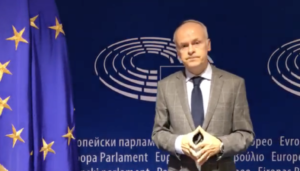 Director of the European Coalition for Israel in Brussels, Tomas Sandell

Sandell said in a Jerusalem Post exclusive report in November that Merkel called Romanian president, Klaus Iohannis, to convince him to not relocate his country’s embassy to Jerusalem. The move prompted him to go public.

Speaking from the European parliament, Sandell said, “What we have found out, something I heard for quite some time already, from central and eastern European countries that would have an inclination to move their embassy to Jerusalem, this is the natural thing for them to do, is that they have received phone calls from Berlin, from Angela Merkel, the chancellor. Basically, this cannot happen under any circumstances.”

“I have spoken to many Germans these last few days in Brussels,” he said. “They are not aware of this, and all of them would be shocked that all of the countries in the European Union today would want to block an embassy move to Jerusalem, not only for your own country, but for other countries that have the conviction [that] this is the right thing to do, the only country to do would be Germany. This is a big shock.”

Sandell said many of Merkel’s telephone calls took place to European leaders in April when “many of the nations were seriously considering moving their embassies.”

Sandell said Merkel’s anti-Israel moves have to do with the Iran nuclear deal, which “has been very much supported by Germany [and] the German government.”

He added that Merkel’s move to block the relocation of embassies was also sparked by “how Germany did not block the marking of Israeli goods from disputed territories” in 2015. He said it was anticipated that Germany would stop the penalties against Israeli products. Germany instead implemented “this counterproductive measure” to punish Israeli goods, said Sandell.

Germany and the EU singled out only Israeli goods from one territorial conflict in the world to penalize the Jewish state with a labeling system on its merchandise.

He said Merkel’s policy is “of great concern for us who support the Jewish people, support the state of Israel.”

He ended his video message by stating the importance of recognizing “Jerusalem as the capital of Israel.”