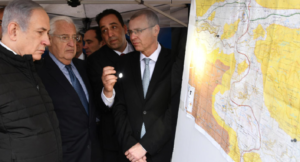 Channel 13 News political correspondent Barak Ravid reported that the White House is moving forward with the implementation of President Trump’s peace plan. The main issue at stake at this stage is the work of the Israeli-American Joint Committee, which is precisely marking the territories in Judea and Samaria that the United States will recognize as part of Israel under the Trump plan, and which Israel will be able to annex if it wishes to do so.

The US Ambassador to Israel, David Friedman (2nd from left), with the Trump administration’s ‘sovereignty mapping team’ – Photo: Israel’s GPO

President Trump’s senior adviser Jared Kushner said in a closed briefing to Democratic and Republican senators yesterday that the mapping [of areas to be included in Israeli jurisdiction] is expected to continue for several more months.

According to Ravid’s report, Kushner emphasized that if the Palestinian Arabs decide to return to negotiations during this time period, they may have an opportunity to improve on the proposal but if they fail to do so, the sovereignty process will continue and “they will have only themselves to blame.”