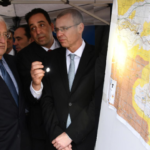 Palestinian kleptocrats continue to rebuff the Trump Team’s creation of a “master fund” to administer the $50B plan that will implement monumental national projects modeled after the Marshall Plan (that rebuilt Europe after World War II) knowing full well it will reduce Palestinian poverty by 50% and bring down their sky-high unemployment rate to single digits.

The Trump administration on Saturday unveiled a $50 billion Palestinian investment and infrastructure proposal intended to be the economic engine to power its much-anticipated but still unreleased “deal of the century” Middle East peace plan.

The plan, which calls for a mix of public and private financing and intends to create at least a million new jobs for Palestinians, was posted to the White House website ahead of a two-day conference in Bahrain that is being held amid heavy skepticism about its viability and outright opposition from the Palestinians. Continue Reading »