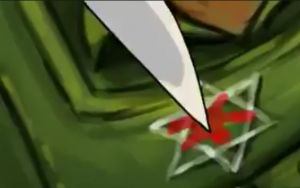 2 Israel Border Policemen were lightly wounded by stab wounds to their upper body in yet another barbaric knife attack by a Palestinian terrorist seeking martyrdom.

Attacker was shot and died from his wounds shortly after.

Two Israelis were injured in a stabbing attack at Jerusalem’s Damascus Gate by the Old City on Friday. 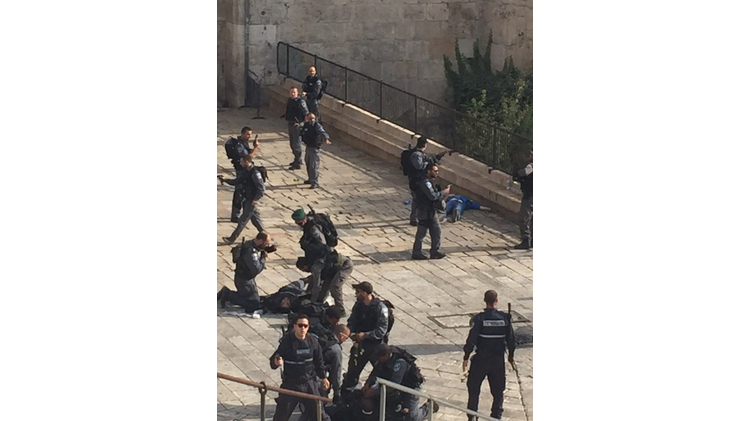 The site of a stabbing attack that injured a police officer at Jerusalem’s Damascus gate on October 11, 2015 – Photo: i24news

The injured were reportedly border police and were lightly wounded by stab wounds to the upper body.

A Palestinian bystander was also lightly injured by shrapnel.

“A terrorist attacked a squad of officers from behind, stabbed and wounded them lightly, the squad responded with fire and neutralized the terrorist,” police said, confirming the death of the perpetrator and identifying him as a 20-year-old Palestinian from Kafr Aqeb.

The injured officers were treated on the scene by Magen David Adom medics and evacuated to the Shaare Zedek Hospital in the city.

The attacker was shot and died from his wounds shortly after.

Jerusalem’s Damascus gate has been the site of numerous attacks since the wave of terror erupted in October. Earlier this month a combined shooting and stabbing attack at Damascus gate killed a 19-year-old Israeli border police officer.

The attack occurred as the funeral for 21-year-old Tuvia Yanai Weisman, an Israeli soldier who was killed in a stabbing attack at a supermarket in the West BankThursday, took place at Jerusalem’s Mount Herzel military cemetery.

Weisman left behind a wife, and a four-month-old baby.

At the funeral his wife, Yael, said “Who would have thought that I would write to you when you are no longer with me. You were always full of endless giving.”

“If you had not run to help, you would not be Yanai. I love you dearly,” she added.

Since October 1, Palestinian knife, gun and car-ramming attacks have taken the lives of 27 Israelis, an American and an Eritrean, according to an AFP count.

At the same time, 172 Palestinians have been killed by Israeli forces, most while carrying out attacks but others during clashes and demonstrations.