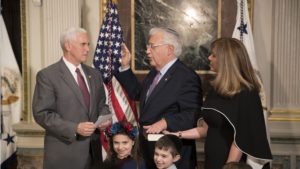 Friedman, a leading force behind Trump’s decision three weeks ago to recognize Jerusalem and move the US embassy there from Tel Aviv, characterized the Palestinian reaction as “largely emotional,” saying they “unfortunately overreacted” because Trump made clear that the US was “not taking a position on any final status issues, including the specific boundaries of the Israeli sovereignty in Jerusalem.”

In light of the Palestinians resulting rejection of any US role in the peace process, Friedman said there will be no process without Washington’s involvement.

“There is no path around the United States,” he said. “Israel has made it clear that they will not engage under the sponsorship of any other nation. You cannot clap with one hand. Moreover, only the United States has the regional credibility to bring forward a historic peace agreement.”

The president’s Jerusalem steps – as well as the partial shutdown of the PLO mission in Washington, and the Taylor Force Act that, if it passes the Senate, will cut US funding to the PA if it continues paying wages to the families of terrorists – reflects the will of the American people as reflected in US laws, Friedman noted.

“We are a nation of laws – and those laws exist to reflect important government policies,” he said. “There is absolutely no reason why the Palestinians cannot comply with these laws and, if they do, the peace process will be greatly advanced.”

Regarding whether Trump should or could expect a domestic diplomatic bounce from US Jews – a constituency that voted overwhelmingly against him in 2016, Friedman said: “I firmly believe that American Jews of all streams owe the president an enormous debt of gratitude for his historic decision in favor of Jerusalem. While the president didn’t reach his decision in order to curry favor with any constituency, he certainly deserves all the thanks that he has received.”

Trump, Friedman said, will go down in history “as one of Israel’s greatest friends,” and “we must all recognize and applaud the courage and moral clarity displayed by the president in affirming, against the wishes of so many other nations, the centrality of Jerusalem to Israel and the Jewish people.”