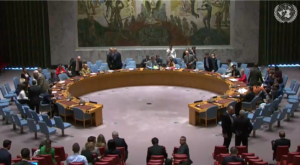 Israel said the 10 apartment buildings demolished on Monday, most of them still under construction, had been built illegally and posed a security risk to Israeli armed forces operating along a barrier that runs through the West Bank.

A PA building is demolished by the IDF in Wadi Hummus, on Israel’s side of the security barrier just outside of Jerusalem. 22/7/2019. – Screenshot: Twitter/PLO

U.N. officials, who had called on Israel to halt the demolition plans, said 17 Palestinians faced displacement.

Kuwait, Indonesia and South Africa circulated a five-paragraph draft statement to the 15-member Security Council on Tuesday that expressed grave concern and warned that the demolition “undermines the viability of the two-state solution and the prospect for just and lasting peace.”

The United States has long accused the United Nations of anti-Israel bias and shielded its ally from council action.

The demolition of the Palestinian buildings is part of the latest round of protracted wrangling over the future of Jerusalem, home to more than 500,000 Israelis and 300,000 Palestinians.

The Palestinians want a state in the West Bank and Gaza Strip with east Jerusalem as the capital, all territory captured by Israel in 1967.

Greenblatt told the Security Council on Tuesday a peace plan cannot rely on global consensus, inconclusive international law and “unclear” U.N. resolutions, sparking pushback from several countries. He said a decision on the release of the political component of the U.S. plan would be made “soon.”

The buildings demolished on Monday were near what Israel describes as a security barrier. The initial draft Security Council statement described the construction of the wall by Israel as contrary to international law.

Israel credits the barrier – projected to be 720 km (450 miles) long when complete – with stemming Palestinian attacks. Palestinians call it a land grab designed to annex parts of the West Bank, including Israeli settlements.