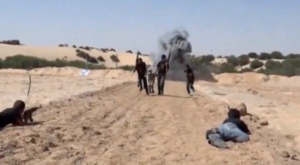 The legislation—titled the “Sanctioning of the Use of Civilians as Defenseless Shields Act”—passes to the Senate, where it is set to be approved, before heading to President Donald Trump to be signed into law.

The American Israel Public Affairs Committee (AIPAC) lobbying group and the Christians United for Israel organization pushed for the bill, which has received bipartisan support.

A detained Gazan infiltrator says, “They tell women to go forward. They say to the woman: ‘Go ahead, you are a woman, and the Israeli army does not shoot at women.’ They tell small children: ‘Go ahead, the army does not shoot at small children.’ They tell a child to go ahead and he goes, it’s a little boy. They deceive him.” – Photo: IDF Spokesperson’s Unit

“This is the first time Congress has taken legislative action against this heinous practice,” AIPAC wrote in a statement. “The importance of this (bill) is underscored by the recent discovery of Hezbollah terror tunnels into Israel that originated under the cover of civilian houses in Lebanon. And just weeks ago—using the cover of civilian populations in Gaza—Hamas fired more than 500 rockets at communities across southern Israel.”

The legislation calls for sanctions on members of terrorist groups or foreign state actors that deliberately place civilians in harm’s way.

For example, Israel alleges that Hamas regularly uses supposedly neutral locations such as hospitals and UNWRA (United Nations Relief and Works Agency) schools to store caches of rockets, forcing the Israeli military to strike these targets. By ramping up civilian casualties, Hamas hopes to turn world opinion against Israel.

“Yet the leverage of these sanctions needs to be assessed especially if the US is acting alone in imposing them,” said Roee Kibrik, an expert in international relations and Israeli security at the Mitvim Institute, an Israeli foreign policy think tank.

“Even without this law the US government can easily cut funding from various groups and organizations such as UNWRA. It can basically do what it wants already.”

The legislation comes as Washington’s influence on the ground in the region is deteriorating, Kibrik explained. “Take what is happening now in Gaza; it is not the US that pays Hamas; rather it is Qatar with Israel’s help. Does this mean Israel would be acting against Congress’ laws? This issue is much more complicated than it appears.”

Asaf Romirowsky, a Middle East historian and executive director of Scholars for Peace in the Middle East, said that the “biggest debate has always been over distinguishing fighters from non-combatants, as well as discerning what the legitimate targets are.”

Hamas and Hezbollah have erected charitable wings in their operational structures which they use to compensate for their human shields tactic, Romirowsky noted. “Up until now, this practice has not been targeted by any US laws.”

Discovered Hezbollah attack-tunnel extends from under a home in southern Lebanon, 600+ feet through solid rock and into Israel. – IDF

He believes that Congress is pushing forward the legislation because of Hezbollah’s construction of subterranean terror tunnels stretching into northern Israel and due to the ongoing violent protests in Gaza.

“Many people do not understand the tactics used by these groups, and the US is giving itself another tool to tackle this problem,” Romirowsky concluded.

The US move comes on the backdrop of a looming congressional debate on whether to include the Israel Anti-Boycott Act in a massive annual spending bill that must be passed to enable the government to keep functioning. That legislation, which some left-leaning lawmakers oppose, would criminally penalize American citizens that participate in boycotts against Israel and companies operating therein.

Despite American efforts to bolster the security of the Jewish state, US Secretary of State Mike Pompeo reportedly declined an Israeli request to slap sanctions on Lebanon after the Israel Defense Forces uncovered Hezbollah’s network of tunnels.

Israel is in the process of destroying this underground network in an operation dubbed “Northern Shield.”