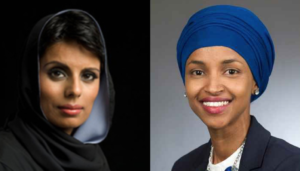 “In her remarks, she has branded every Muslim in America as an antisemite, and this is absolutely unacceptable and un-Islamic,” Ahmed said.

Some of the interview focuses on the comments Ilhan Omar made about AIPAC, suggesting that American politicians are paid-off or bribed for their support of Israel. Ahmed further explained that there is a “incredible bias that is disturbing,” and that Omar fails to mention that Muslim nations such as Saudi Arabia and Qatar spend “tens of millions of dollars more on lobbying than AIPAC does” to push their agenda within the U.S. government each year.

Ahmed believes based on this bias Omar should be ejected from the House of Foreign Affairs Committee immediately because anything that the Minnesota Representative now proposes can be “interpreted through the lens of antisemitism.”

“Also very concerned, I am, that she is affiliated with the Boycott, Divestment and Sanction movement, which is legitimizing and normalizing antisemitism. It’s a movement that calls for the eradication of the State of Israel, which is unacceptable. It’s disguised as a human rights movement, but it’s actually antisemitism,” Ahmed explained.

Ahmed believes that this this the new form of antisemitism, and that this bias is infecting the Islamic community, and she quoted a Washington Post op-ed that claims antisemitism is carried through Islam whether Muslims like it or not, and that is anti-ethical to true Islamic beliefs and believes American Muslims must reject this notion.

Ilhan Omar since apologized for the comments regarding AIPAC, “Antisemitism is real and I am grateful for Jewish allies and colleagues who are educating me on the painful history of antisemitic tropes,” she wrote. “My intention is never to offend my constituents or Jewish Americans as a whole. At the same time, I reaffirm the problematic role of lobbyists in our politics, whether it be AIPAC, the NRA or the fossil fuel industry.”

However, Ahmed believes that this apology is “hollow” and still concerning. She says that there is no room or justification for antisemitic speech, and that lobbying is a part of liberal democracy and should not be an excuse for the rhetoric used.

“[Antisemitism] is not only hate speech, it is genocidal speech. Antisemitism is the only vilification and prejudice of people that leads directly to genocide,” Ahmed explained.

“Islam teaches us to treasure and revere the Torah, Moses, just as it does Jesus and the bible [this rhetoric] is not coming from Islam, this is de nova, this is a 20th century construction that has been adopted in the modern Arab world and is causing strife against Muslim’s who don’t have that critical thinking and who see maybe the success of Israel or maybe the intelligence of the Jewish community with resentment and with animus, and I don’t accept that this is a means to advocate for the Palestinian people.” Ahmed concluded.