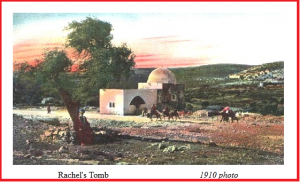 The Tomb of the Patriarchs in Hebron, where the Jewish patriarchs Abraham, Isaac, and Jacob as well as three Jewish matriarchs, Sarah, Rebecca, and Leah are entombed. – Photo: IDF SPOKESMAN’S UNIT

Both resolutions were sponsored by Egypt, Jordan, Lebanon, Morocco, Oman, Qatar and Sudan, and were approved within minutes at the commission’s meeting, which includes the 59 members of UNESCO’s Executive Committee. Israel is not a member of the Executive Committee.

The resolutions also refer to Israel as “occupier” and condemn “Israeli army violations against Palestinian universities and schools,” criticize the construction of the security fence, deplore the destruction of Palestinian schools, including in the village Khan al-Ahmar and regret Israel’s excavation projects in east Jerusalem.

UNESCO’s assistant director-general for external relations, Nicolas Kassianides, said at the meeting that the resolutions were adopted following close consultations between the member states, and welcoming “the spirit of constructive dialogue that enabled to reach a consensus.”

Kassianides further said the adoption of the resolution by consensus “confirms the positive momentum that started last year, especially on this subject which is very sensitive,” hailing in particularly efforts by the Palestinians, Jordan and Israel to reach agreement.

Over the years, UNESCO included both items in the final text adopted annually by the agency’s Executive Committee. But when Audrey Azoulay took office last year as head of UNESCO, a compromise was achieved, with the resolutions adopted as an annex, and not inside the body of the text. This was the case today as well.

Israel’s ambassador to UNESCO at the time, Carmel Shama-Hacohen, welcomed the compromise, noting that Azoulay was taking significant steps to change the body’s traditional anti-Israeli approach. Last April, UNESCO again delayed adopting any resolution on the issue, with Ambassador Shama-Hacohen hinting that Israel might reconsider its position on leaving.

Nevertheless, Israel did not back down on its decision to exit the body by December this year, in parallel with the US quitting the agency. Prime Minister Benjamin Netanyahu reiterated Israel’s intention of leaving UNESCO last month, declining an invitation by Azoulay to participate at a conference on fighting antisemitism, held on the margins of the UN General Assembly in NY.

Netanyahu then commented that “in withdrawing from UNESCO in 2017, Israel and the United States made a clear moral statement that UNESCO’s antisemitism will no longer be tolerated. If and when UNESCO ends its bias against Israel, stops denying history and starts standing up for the truth, Israel will be honored to rejoin.”

Director for international relations of the Simon Wiesenthal Center Dr. Shimon Samuels told The Jerusalem Post that “the Israeli Foreign Ministry has accepted last year the compromise of the annex, but on the backdrop of Israel’s decision to leave the agency; since Israel was leaving there was not much point of arguing about that.”

“But the big question is: what now?” Samuels said. “What will happen after Israel leaves? I believe that the role of all the Jewish groups accredited to UNESCO will become significantly more important, in confronting such challenges.”

Samuels noted that Azoulay is keen on enhancing the agency’s relations with the Jewish world, but that without Israel as a member state, this might prove difficult. Still, the Jewish organizations, he said, are committed to take up the job of defending the cause of Israel and world Jewry in UNESCO.

Representative of B’nai B’rith Stephane Teicher told the Post that while he regrets Israel’s decision to quit UNESCO, he understands the reasoning behind it.

“These resolutions are bound to reappear every year, unless Israel is granted a special veto status, which is obviously not the case,” Teicher said. “Jerusalem believes that delaying these resolutions each time is not a solution, I understand that. We, the Jewish organizations, will of course enhance now our lobbying for Israel within UNESCO.”

Teicher noted that the members of UNESCO’s Executive Committee applauded the announcement on the consensus, stating that “everybody [was] relieved that such an issue was resolved through consensus. And this is to the credit of Audrey Azoulay, who has deployed significant efforts to de-politicize the agency.”

Israeli and Palestinian delegates to UNESCO refused to comment, though an Israel source told the Post that Israel recognizes the efforts made by Azoulay to change UNESCO’s attitude.