Tag Archive for Tomb of the Patriarchs 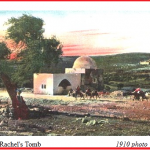 Not only was the mezuzah that adorned the main door of the Tomb desecrated by the vandals, but thousands of shekels worth of equipment was stolen from the holy site’s maintenance staff.

Arab vandals removed a mezuzah from the Tomb of the Patriarchs in Hevron on Friday, while the holy site was used by local Muslims for Ramadan prayers.

The mezuzah, which adorned the main door of the Tomb, is believed to have been desecrated by the vandals

A storage shed used by the Tomb’s maintenance staff was also broken into, with thousands of shekels worth of equipment stolen. Continue Reading »

Two mezuzot (cases containing Jewish holy scriptures affixed to the doorpost) had been torn off & stolen, and a 3rd was damaged at the Tomb of the Patriarchs, Judaism’s 2nd holiest site.

Jewish worshippers who arrived at the Cave of Patriarchs in Hevron after Muslim prayers on Friday were horrified to find that the site had been vandalised. The Cave (known as Me’arat Hamakhpela in Hebrew) is usually split between Jewish and Muslim worshippers, but this past Friday it was open exclusively to Muslim worshippers in honour of Ramadan. Continue Reading »