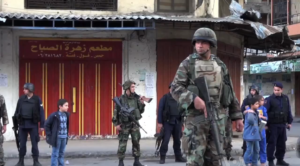 The report quotes a chief warrant officer for the French contingent as saying during an interview: “In the evening we never leave the barracks because the Lebanese forces are not friendly. However, that is when things happen.

“We are caught in the aggressor’s grip. Doing the bare minimum has become a political choice,” the officer added.

A former liaison officer with the UN Interim Force in Lebanon, who was only recently transferred to another post, told the newspaper that “when we would detect military activities in our area, especially near the Blue Line [border with Israel], the Lebanese Army would prevent us from posting observers. It is as if those decisions did not come from them. Everyone knows that Hezbollah is using the area for the next war.”

Defense Minister Avigdor Liberman and senior IDF officers have repeatedly warned that the Lebanese Army has lost its independence and become an “integral part” of Hezbollah’s network.

The IDF has accused the Shi’ite terrorist organization numerous times of violating the Security Council resolution that set the terms to end the 34-day Second Lebanon War fought between Israel and Hezbollah during the summer of 2006.

There are some 10,500 peacekeepers deployed in southern Lebanon – including some from countries that do not recognize Israel – and 585 Lebanese civilian staff members.

A Finnish commander suggested to the French paper that some forces associated with UNIFIL might also be assisting Hezbollah.

“I can assure you that Indonesian peacekeepers are constantly reporting Israeli movements to various Lebanese actors,” the commander is quoted as saying. He added that some of the civilian employees “do not hide their Hezbollah membership.”

In July, the IDF said Hezbollah had established observation posts under the guise of NGO “Green Without Borders” near the Blue Line since April, presumably in order to gather intelligence.

The army released footage of Hezbollah members gathering intelligence on Israel, saying that the group continues to use the NGO as a front for intelligence gathering and that it “is able to maintain the secrecy of its intentions while avoiding UNIFIL criticism by warnings from the Lebanese army.”

A UNIFIL incident report seen by The Jerusalem Post states that troops were denied access to a public location in a southern Lebanese village by three men dressed in military garb who had left a mosque bearing a Green Without Borders flag.

“When the patrol reached the area, the males signaled to ZULU Patrol to stop,” it reads. “The patrol leader tried to negotiate a bypassing route in various ways but got only the same firm and polite message to leave the area.”

The report stated that it was assessed that the three men were working for Green Without Borders “as their clothing style and appearance are similar to what have been reported in some of the locations where the GWB are active.”

UN spokeswoman Eri Kaneko has denied Israel’s accusations. In July, she said that UNIFIL is in contact with Lebanese armed forces to ensure that there are no violations of the resolution, “to avoid any misunderstandings or tensions that could endanger the cessation of hostilities.”

While Green Without Borders members have planted trees in the area, UNIFIL “has not observed any unauthorized armed persons at the locations or found any basis to report a violation of [Security Council] Resolution 1701.” The 2006 resolution was intended to resolve the 2006 Israel-Lebanon conflict.

IDF Chief of Staff Lt.-Gen. Gadi Eisenkot has said while UNIFIL is helping to maintain calm in southern Lebanon, its leadership does not do enough to prevent Hezbollah from violating the resolution. Eisenkot has accused Hezbollah of continuing to prepare itself for war in villages, cities and towns south of the Litani River, “arming itself with more lethal and accurate weapons to harm the Israeli home front.”

In August, IDF Intelligence Directorate head Maj.-Gen. Herzi Halevi told UN Secretary-General Antonio Guterres in Jerusalem that Hezbollah was tightening its hold on Lebanon. He urged the UN to take more steps to prevent a war.