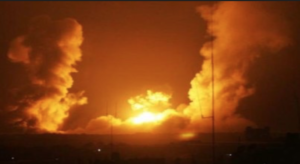 According to IDF spokesman Brig.-Gen. Ronen Manelis, the airstrikes were carried out in three waves in response to the Iranian Revolutionary Guard Corps firing a surface-to-surface missile a day earlier toward the Golan Heights, which was intercepted by the Iron Dome missile defense system. The missile fire drew a rare response from Israel, as it carried out daytime strikes on Syrian targets.

Prime Minister Benjamin Netanyahu warned Israel will continue “operating against Iran and against the Syrian forces that are abetting the Iranian aggression,” he said on Monday. “We will strike anyone who tries to harm us,” the prime minister said, reiterating his long-standing claim Israel will not allow for Iranian entrenchment in Syria.

Iran’s former defense minister, Admiral Ali Shamkhani said on Tuesday that Iran is not threatened by Prime Minister Benjamin Netanyahu and will be working with Syria to fight terror, according to Channel 12.

“Cooperation with Syria is essential to eradicate terror,” the senior official said in the report. “Our policies are founded on being good neighbors.”

“A good dialogue with our neighboring countries is important in order to deal with the security crisis in the region,” Shamkhani continued.

In a related development, The British Royal Air Force will reportedly pull out more than half of its fighter jets operating over Iraq and Syria, following United States President Donald Trump’s decision to withdraw US forces from the area, according to the British tabloid  the Daily Mail.

“This in no way weakens our resolve to carry out missions against ISIS,” a senior UK defense official told the paper.