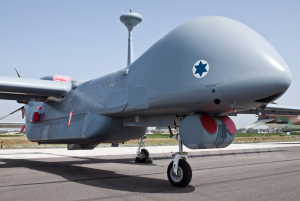 German plans to lease Israeli-made drones for 10 years has been suspended after American weapons manufacturer challenges decision in court for the ‘Blue & White’.

Germany’s plans to lease Israeli-made drones has been put on hold after a legal challenge submitted by an American weapons manufacturer.

The decision by the German army to lease the Heron TP drones from Israel Aerospace Industries was announced by Defense Minister Ursula von der Leyen in January for temporary use until 2025 when development of a joint German, Italian, and French drone is expected to be completed.

US defense firm General Atomics first protested the rejection of their contract in favor of the Israeli contract in June, questioning why Germany was leasing Israeli drones rather than purchasing the firm’s less expensive Predator B model. The company’s bid was rejected by German’s cartel office on August 17.

According to a report by Reuters, General Atomics filed a new lawsuit on Monday with the German higher court in Duesseldorf, in a move that could put the deal on hold for up to nine months.

“This move by General Atomics is very unfortunate and frustrating, especially since our legal position was upheld by the (cartel office) with very clear words,” Reuters cites a senior German defense acquisition official telling lawmakers in a letter.

This latest legal challenge, says General Atomics spokeswoman Melissa Haynes was meant “to ensure that this procurement is conducted as a fair and open competition; thereby ensuring that the German Ministry of Defense procures the most technologically superior and cost efficient solution,” the Times of Israel reports.

Israel’s Heron drones, known as the Eitan (“Steadfast”), have a range of over 7,400 kilometers and can remain airborne for over 70 hours.