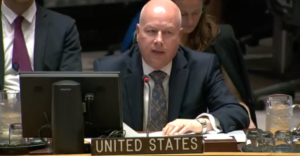 “It would be a mistake for the Palestinians not to join us. They have nothing to lose and much to gain…” he said adding that it would be the first step towards a political solution to the conflict that would “transform the lives of the Palestinians.”

He pointed out the “irony” that at the same time as the economic conference in Bahrain, UNRWA will be hosting a “pledging conference for a broken system,” as he blamed the Palestinian refugee organization for squandering the significant funds donated by many countries, predominantly the US.

“Since the establishment of UNRWA, the United States has contributed about $ 6 billion, but there has been no progress in the quality of life of the Palestinians. UNRWA has abandoned the Palestinians, and they deserve much more, “Greenblatt said.