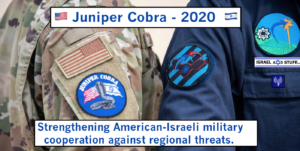 The drill will take place between March 3rd and March 13th, will be the largest IDF and USEUCOM joint exercise taking place this year with over 2,500 US troops participating in several different locations- in Israel, Europe and the United States. Some 600 US troops, who arrived in Israel in recent weeks, will be training in Israel alongside 1,000 Israeli Aerial Defense troops, logistics units, medical forces, and additional IDF units.

“The objectives of the exercise are to strengthen cooperation, coordination and mutual learning between the two armies, as well as to improve the capability to defend against missile threats, and joint air defense,” the IDF said in a statement.

The exercise will simulate a scenario in which American forces will be deployed to Israel in order to work alongside the IDF’s air defense force. The troops will practice possible scenarios of missile threats in various sectors, and the simulations will include the use of the Arrow 2 and Arrow 3 missile defense system, an advanced version of the Iron Dome, David Sling system as well as a ballistic image management center, in collaboration with the Home Front Command.

While the 600 American troops were deployed to Israel as part of Juniper Cobra, the US military and IDF called off a joint exercise over concerns of the new coronavirus.

The “Eagle Genesis” exercise between the IDF’s Ground Forces and EUCOM troops to train against regional threats, was cancelled and over 60 US personnel who had travelled to Israel returned to their bases on Friday at the request of the Israeli government.

A US military official told CNN that the drill was cancelled “out of an abundance of caution” despite none of the American troops, including paratroopers from the 173rd Airborne Brigade stationed in Italy had been reported ill.

Israel’s Health Ministry has included Italy on the list of countries from which people arriving in the country must be quarantined.

Also on Tuesday the Homefront Command in collaboration with the Ministry of Education and local authorities held a security drill simulating a missile attack at schools around the country.

As part of the drill, which examined the competence and maintenance of the institution’s bomb shelter, all students practiced getting into protected spaces during recess time (10.05 in the morning).

The military said that they would publish the results of the leading regional authorities and schools in the field of emergency preparedness.

While the military contends that the drills are part of scheduled exercises and are not related to the high tensions with Iran on Israel’s northern border, an Israeli intelligence assessment found that the threat posed by Iran- including its nuclear and ballistic missile program- is the number one priority for the IDF.

Iran, which possesses over 1,000 short- and medium-range ballistic missiles, is suspected of continuing to smuggling weapons to countries and non-state actors such as Hezbollah which is assessed to have an arsenal of between some 100,000 and 150,000 missiles on Israel’s northern border and Hamas in the Gaza Strip.

Washington and Israel have signed an agreement which would see the US come to assist Israel with missile defense in times of war and in March, EUCOM deployed a THAAD anti-ballistic missile defense system in Israel as part of a month-long joint drill between the two allies

During the drill the THAAD system, which is considered one of the most advanced systems of its kind in the world, was added to the existing Israeli air defense systems which defend against long-range ballistic missiles, giving the IDF an opportunity to practice it’s integration in the IAF’s Air Defense Array.