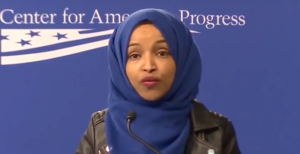 Omar’s pro-BDS resolution is retaliatory, a response to the House Foreign Affairs Committee moving forward with 5 pro-Israel bills, two of them, bills that will not only sanction supporters of Hamas (such as herself), but will also supplement improvements to Israel’s defense & security.

WASHINGTON – US Rep. Ilhan Omar (D-Minnesota) put forth a new pro-BDS resolution in Congress “affirming that all Americans have the right to participate in boycotts in pursuit of civil and human rights at home and abroad, as protected by the First Amendment to the Constitution.”

The freshman congresswomen has become a focal point of anti-Israel and antisemitic sentiment, following numerous controversial comments regarding Israel.

Omar’s resolution revealed on Wednesday, cosponsored by Rep. Rashida Tlaib (D-Michigan) and Rep. John Lewis (D-Georgia), seeks to oppose “unconstitutional legislative efforts to limit the use of boycotts to further civil rights at home and abroad,” and “urges Congress, States, and civil rights leaders from all communities to endeavor to preserve the freedom of advocacy for all by opposing anti-boycott resolutions and legislation.”

Rep. Brad Sherman (D-California) told The Jerusalem Post that Omar’s resolution should not be taken seriously.

“I can’t imagine that any committee is going to mark up or take seriously any pro-BDS resolution,” Sherman said. “Am I worried about the overall BDS movement worldwide as an economic matter? No. As an effort to delegitimize Israel, of course. The comments here today are a tiny part of that delegitimizing effort.”

Rep. Lee Zeldin (R-New York), who spoke right after Omar, said “the BDS movement has not distant itself from Hamas,” and that “Hamas uses women and children as human shield.” He described in detail the terrorist threats from Hezbollah and other organizations, and stressed the need to stand by Israel.

“Let’s not deny our duty to be honest brokers,” he continued. “To oppose resolution 246 and to say that everything is due to the Israeli occupation? Why not mention that in 2008, Israel had offered to withdraw from 93% of Judea and Samaria? Or what about our students in colleges from coast to coast, being attacked with blunt antisemitism in the name of BDS?

“Don’t come to this committee and to this Congress and start blaming Israel for all of the violence that is happening to it. That is not honest to accuse Israel to everything that it is suffering from.”

Omar’s action was in response to the House Foreign Affairs Committee moving forward with five pro-Israel bills, three of which are resolutions with declarative purpose, and two others bills that seek to sanction supporters of Hamas and to make improvements to the defense and security assistance to Israel.

#1 House Resolution 246, sponsored by Rep. Bradley Schneider (D-Illinois), opposes the BDS movement, “including efforts to target United States companies that are engaged in commercial activities that are legal under United States law, and all efforts to delegitimize the State of Israel.” It also “urges Israelis and Palestinians to return to direct negotiations as the only way to achieve an end to the Israeli-Palestinian conflict.”

#2 House Resolution 326, introduced by Rep. Alan Lowenthal (D-California), expresses the sense of the House of Representatives that “only a two-state solution to the Israeli-Palestinian conflict can ensure Israel’s survival as a secure Jewish and democratic state and fulfill the legitimate aspirations for a Palestinian state.”

According to the resolution, “a United States proposal that fails to expressly endorse a two-state solution as its objective, that expressly or tacitly encourages unilateral annexation of territory, or is otherwise inconsistent with the broadly held consensus positions for resolving the conflict’s final status issues as reflected in previous United States proposals, is likely to put a peaceful end to the conflict further out of reach.”

#3 House Resolution 1850, the Palestinian International Terrorism Support Prevention Act sponsored by Rep. Brian Mast (R-Florida) is asking “to impose sanctions with respect to foreign support for Palestinian terrorism, and for other purposes.”

It directs the president to submit an annual report to Congress, identifying people or agencies that “knowingly assists in, sponsors, or provides significant financial or material support” for Hamas, Islamic Jihad and its affiliates.

The legislation directs the president to impose at least two different financial sanctions on the people or agencies that are identified as assisting these terror groups. A foreign government that would support the terror organizations could face a cut of foreign aid. The president could waive the obligation for imposing sanctions on a case by case basis.

#4 House Resolution 1837, United States-Israel Cooperation Enhancement and Regional Security Act sponsored by Rep. Ted Deutch (D-Florida) is seeking “to make improvements to certain defense and security assistance provisions and to authorize assistance for Israel, and for other purposes.”

#5 House Resolution 138, introduced by Rep. Alcee Hastings (D-Florida), aims “support for addressing the Arab-Israeli conflict in a concurrent track with the Israeli-Palestinian peace process and commending Arab and Muslim-majority states that have improved bilateral relations with Israel.”

Omar said that she supports the resolution by Lowenthal, but would not support the other four that were introduced as a block since it includes the resolution that opposes BDS.

“When Israeli Prime Minister Benjamin Netanyahu says, and I quote, that he is more committed to the settlements than any [leader] in Israel’s history, we should honestly say that it is an impediment to peace,” said Omar. “There are consequences to these actions when Netanyahu vows to make the occupation permanent by annexing Palestinian land in the West Bank.

“At the same time we are providing them with billions of dollars in military aid, we should say there are consequences to these actions,” she continued. “And in previous times, Bush and Reagan have said that.”

“We must support an end of the occupation and seek to achieve a two-state solution,” she added. “I believe firmly that the path to peace does not lies with a violent mean. We should condemn in the strongest terms violence that perpetuates the occupation. Whether it’s Israel, Hamas or individuals. We cannot also condemn non-violent means. We cannot simultaneously say we want peace and to oppose peaceful means to hold our allies accountable.”

At the end of the hearing, she told reporters that she’d be traveling to Israel and the Palestinian territories in a few weeks. “I am going in a couple of weeks and so I’ll learn more.” She did not provide any additional details regarding her travel plans.