Want a ‘Dream Vacation’ in Israel? – Just be the 3 millionth tourist to get it! 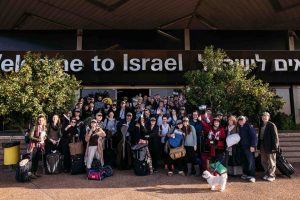 On Tuesday, the 3 millionth tourist to land in Israel this year is scheduled to arrive, marking an all-time record high for incoming tourism. The lucky visitor will be given a special prize package to celebrate the event and promote tourism to Israel.

Photos of the tourist’s upgraded vacation will be used to market Israeli tourism as part of a campaign to attract workers to Israel’s tourism industry.

The 3 millionth tourist to land in Israel this year will be given a royal welcome – Photo: Dana Shraga/Israel Defense Ministry

Tourism Minister Yariv Levin, who was planning to meet the tourist at Ben-Gurion International Airport, said on Sunday that he was “excited to welcome the tourist and break the 3 million barrier.”

“We are about to end the year with a great achievement – a result of the enormous efforts we are investing into marketing Israel worldwide, in exceptional cooperation with airlines, and the ties we are working to strengthen with travel agents. All this has been bearing fruit and has so far brought in some 17 billion shekels [$4.8 billion] and thousands of jobs to the Israeli economy,” Levin said.

2017 is on track to see a 20% increase in incoming tourism compared to 2016. The tourism sector is expected to keep expanding, and the Tourism Ministry is working on ways to improve tourists’ experience in Israel.

The 3 millionth tourist campaign is intended to attract workers to the tourism field, which is currently suffering from a manpower shortage in major areas such as hotels, which are severely understaffed in peak seasons. The southern resort town of Eilat, for example, employs some 1,000 Jordanian hotel workers because of the lack of Israeli workers. The ministry is working toward resolving this shortage, especially given the predicted continued growth.